From Drug Dealing Back to Myself

Are you ready to take your courageous heart and desire to impact the world to the stage and tell your story?
YES! I am ready!
Description
Speaker
Transcript
Joe Axel Moore gives a very down-to-earth talk about the similarities and differences of being a coke dealer and running a call center. When Joe’s company started to fail, he says he was “Crushed by the feeling of failure that's overcoming me.” He tells of breaking down during an argument with his girlfriend, hating the person he’d become. “What I'd actually achieved was being further from being the man that I wanted to be every single day.” From that place of being lost and broken, hope came. Hope gave him the choice “To start creating the world that I want to and become a person I actually respect.” 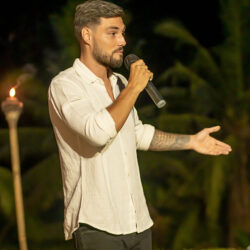 So I'm sat there. I roll another joint, even though I'm already brain-dead from the four Tramadol that I had for lunch. My company's falling apart, and I barely slept for the last few months. I haven't been able to pay any of my staff for the second time over the last three months. Some of these staff are my friends. They're people that are close to me. I'm feeling crushed by the feeling of failure that's overcoming me. The first time this happened, I assured them that I was more than capable of dealing with the situation. I felt like I had it under control. The second time this happened, it was abundantly clear that it wasn't something I had under control, nor was I able to stick to any of my promises.

My mind's still buzzing. And I'm sat perfectly still underneath the heat of a 400 watt light with sweat dribbling off the end of my nose. The twelve five-foot-tall cannabis plants that are sat in my garage needed some water, and I needed the fucking money from them. It wasn't a good spot to be. I wasn't happy where I was. I also wasn't looking forward to returning back into the house. I took out my phone. I looked at the time. It was close to 10:00 p.m. I managed to ignore all the unread WhatsApp messages that just represented more and more problems going on in my life. I had no desire to walk back into that house at that moment. I would actually rather have stayed in that sweaty, horrible little tent rather than go back into that house and listen to my girlfriend tell me what a useless man I'd become.

Despite that pain that I was going through, I slowly picked myself up. I finished the watering process and started slowly trekking my way back into the house while smoking the joint, obviously. As I entered the house, I'm greeted by exactly what I expected. The not-so-patient girlfriend was there, ready to have what was clearly World War III, possibly World War 1,003, by this point. And I knew exactly what to expect. I knew exactly what to go through. It was the exact same argument every single time. Had different variations, of course, but there was the same essence.

"You always put your business before me. I'm not a priority." I know. "You're selfish. You're a narcissist." That I also believe I know. (Thanks guys.) I was getting dramatic then. "You need to close that call center. It's a toxic environment. It's not doing you any good whatsoever." This one was a little bit more difficult to accept. I wasn't as clear on this one. The reason being is I was so scared of failure. My ego was so kicked up around this subject. I was so scared of failing in that business. It was so attached to my identity that I absolutely refused to accept that one even though there might have been a shred of truth in it. We've all probably been in that spot.

So this time is a little bit different. The argument begins. I'm not even hearing any of the words. I'm in a really still place. And then, all of a sudden, I become overcome with a different type of emotion. I start to feel a wrenching feeling in my stomach that starts to double me over. I start to feel tears well up in my eyes. I couldn't even remember the last time that I'd actually cried. This whole sensation was totally alien to me. I was sat there thinking Men don't cry. This isn't what I should be doing. I don't understand.

As I sat there with pain coursing through my body—I had my face in my hands—the last remnants of my ego was dripping through my fingers. And I was sat there just feeling like a scared, upset little boy. It was in that moment that I realized one really, really simple fact. I fucking hated the person that I'd become. I fucking hated myself at that moment in time—everything that I was doing, everything that I was a part of. I'd spent months and months trying to pour buckets out of the sinking ship that I'd been trying to ride that were full of false hope, lies, empty promises.

I'd spent years and years trying to acquire things at the expense of people, trying to be the man when ironically, what I'd actually achieved was being further from being the man that I wanted to be every single day.

I went from being a coke dealer to running call centers. And it was a really interesting transition. I decided that I wanted to get out of the coke game. And initially, I thought it was because it was the right thing to do. What I quickly realized is it was all for self-serving gain—the narcissism kicking back in again for sure. I realized what was happening. And I tried going into call centers. I got into the coke game because I was interested in money, power, and status. I then moved to the call center game because I was interested in money, power, and status. The strange thing was when I was involved in the coke game, the people that were buying things off me, they really fucking wanted the coke. Like there was no two ways about it. They wanted it. Nice and simple. In the call center game, I very much doubt that the older and vulnerable people that we were selling dodgy insurance products to really needed what it was that we were offering, especially when the products that we were offering were pretty much the same price that you would pay for a new TV or a new fridge.

It was in that moment that I kind of realized that legality is not synonymous with morality. And when I sat there in that moment without any of the shiny badges of honor that I had—all of these things that I thought made me successful—all I was left with was myself. I'd spent twenty-eight years chasing after things that really didn't fucking matter, chasing after things that I didn't even like. I was in a really horrible place. I felt broken. I felt lost. But the only thing that was different in this particular moment is that I felt a certain level of hope, and that little piece of hope came from a space of understanding.

I knew who I was. Don't get me wrong, I was not happy with who I was, but I was aware of where I was at. So I had a starting point. Just having that starting point to me was a little glimpse of hope. The fact that I was in the place that I was in, that I felt the way that I did, meant that I wanted to be somebody completely different. And this gave me a choice. It gave me a different option. It allowed me to choose people over things. It allowed me to go into a position where I could empower rather than have power over. This simple, simple thing allowed me to start creating the world that I want to and become a person I actually respect.