Are you ready to take your courageous heart and desire to impact the world to the stage and tell your story?
YES! I am ready!
Description
Speaker
Transcript
Jennifer Koch speaks about the layers of forgiveness—how it took years to forgive someone she knew and how it finally came to her in an unlikely place and time. She describes the feeling of pain leaving and forgiveness entering her body. Jennifer relates how more recently, she was again betrayed and the pain that brought. “Because this pain cut me to my core and cut through all the illusions and my codependency.” The way to picking up the pieces came to her, not through spiritual teachers or tools, but through Instagram. She speaks about letting go of the pain and that “Forgiveness means nothing outside of me can hurt me.” 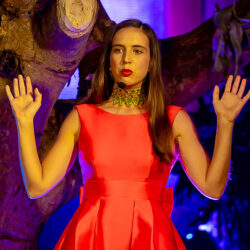 What moves faster than the speed of a flying bullet? New Delhi, India. It was the end of January 1948. Gandhi saw his assassin. He saw the gun and, as the bullet veered straight towards his chest, he threw out his arms in a sign of sweet surrender and murmured the words, "I forgive you." Gandhi epitomizes the power of the human spirit to forgive instantly faster than a moving bullet. I did not tell my story during the Me Too movement because my story is not about my abuse. My story is that of forgiveness. Forgiveness came to me in such an unlikely time and place. It was last July, and I was in my kitchen after a long day of work. And I was scrolling on my phone. I got a message, an anonymous message, but I knew who it was from. He said, "I'm sorry for what happened.

And I think about you often and pray that you have a good life." And for the first time in eight years, I've realized that it wasn't me who was suffering. It wasn't me who was the victim. I understood the meaning of compassion. And I had this visceral feeling in my body like all my pain just welled up and burped out of me. And I let go. I forgave. And I understood what they mean when they say, "A miracle is a shift in perception." So I went about telling my story on forgiveness on stages. And I could see in the audience people who were yearning to forgive. One time, I shared my story quite spontaneously in a public speaking group. And it wasn't rehearsed. And I ended up sharing more of what happened. And as the time ran out, I had to rush through about forgiveness. It felt so raw. And I felt so embarrassed. That wasn't really what I wanted to share. But that night, a woman in the audience tracked me down in the parking lot. And she looked me deeply into my eyes. And she said, "I have a story too.

I can't even imagine sharing it, but how, how did you forgive?" And I told her, "Don't be so hard on yourself. More than anything, it's a willingness. It'll come to you." For me, it's like that quote. They say, "Falling in love is like falling asleep." You resist it. Then it happens very slowly and then all at once. But that's the funny, ironic thing about life. Here I am, this champion of forgiveness. I had no idea what was around the corner. The truth is, very recently in my life, I found out that someone very close to me betrayed me and that our connection was built on a mountain of lies and deception.

This is not one of those surface level betrayals. This is not, you know, taking a steak knife in a dark alley, threatening to steal my Kate bed purse. This is one of those professional greed, Japanese butcher knife stabbing me in the back, almost showing up in my life with a perfect smile. But by the time that I finally turned around and saw the truth what was happening, I was stunned. You? It can't be you of all people. I trusted you. You know all my stories, all of my pain. I don't even know who I am without you, which made me realize that's the problem.

It was really ME who betrayed ME because it was ME who was looking for validation from another person and for permission and for guidance. It was me who was hurting me all along. And as I looked at my life and how to pick up the pieces and how to move on after such a betrayal, I would like to say that I went and asked my spiritual teacher or looked at the bava hu kita, but like many of us, I found my New Age advice on Instagram. Someone who I admire, who is wealthy and successful and competent, shared someone very close to her betrayed her. And she shared about how she could carry on with elegance and with dignity, with her life. And she said to not hide, to hold your head up high, which I knew was a message for me because that's the name of one of my brands, Hold Your Head Up High, which is my neck choker brand. And maybe there is a reason why I named it that. Maybe it was time for me to find out. This time I don't have eight years to hide, and I might not be Gandhi, but I will do my best. What if this knife is one of the greatest gifts of my life?

Because this pain cut me to my core and cut through all the illusions and my codependency. And you know, I could take this knife, and I could throw it back to that person, and I could share what happened, but in the end, I'm only hurting me. So I'm gonna take this knife and this pain, I'm gonna put it down, and I'm gonna let that go. Because this time I learned, that forgiveness means nothing outside of me can hurt me. And that it's my time to hold my head up high. And be me. Thank you.