You Are Not Your Company

Are you ready to take your courageous heart and desire to impact the world to the stage and tell your story?
YES! I am ready!
Description
Speaker
Transcript
Unable find the words to text a friend when his company was sold for billions, Tony Xiao now calls his friends, "Congratulations. I'm so proud of you. I'm so grateful to be on your path." In this talk, Tony explains how that transformation came about. And how his previous busy life cost him important relationships. “Life seems to have a habit of teaching me the same lesson over and over and over again until I really, really get it.” Having a real passion for entrepreneurship, Tony says he now knows that creating from a place of love, in the present, and not from a place of fear, the future, brings him the success he needs. 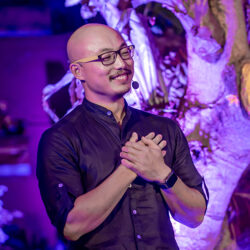 Three-point-two billion dollars. That is the amount my friend's company was just acquired for. Now I, having worked there for a couple of years, stood to make a little fortune from it. Excitedly I took out my phone. I was gonna text him, but I paused. I hesitated. What would I even say? "Congratulations?" That's so cliché. "What happened? I thought we were gonna go public? Wink." Ugh. Who says that? It's gonna so backfire. You know what? You have to just schedule an email to send later. Come on. I mean, he's getting plenty of messages anyway. Doesn't need another one from me, but this is pretty big news. I mean, a couple of billion dollars is worth a text message. I don't even text him that often but wait a second.

Only friends text each other. Are we still friends anymore? I mean, after all, we started at the same place eight years ago. I used to sleep on their couches, and now they're practically at the top of the start of Mount Everest. And here I am, three failed companies later, still struggling in obscurity in the big game of entrepreneurship.

It was 11.00 p.m. I was standing alone in my room in a 7,000 square foot place with five bathrooms all to myself. Dripping wet from the shower, I had no towel. Where the fuck was the towel? So angry beyond anything I realized. "God damn it, it's in the other room." You see, this normally wouldn't be a problem. Except on that day, my left foot was swollen up like a basketball, and I could hardly move. That very morning I just beat my personal best record at the gym. But by evening, for reasons I didn't understand, every step felt like I was going to trip and crack my head open on the concrete floor. I sat down on the toilet seat, burying my head in my hands. I wished my girlfriend was there. She took care of me the last time I was sick. But we broke up. We were together for three years. I haven't cried about that yet. She used to tell me I was always working.

I remembered my mom. She used to help me. She told me I don't call her. And when she calls me, I'm either in a meeting or just about to leave the house. For some reason, I remember this kind lady who gave me a quarter to take the bus home when I ran away from home at ten years old. My grandparents—whose house I was running to on foot along the railroad track, a thousand miles away—they all passed away while I was in college. I didn't get to say goodbye to any of them. I was too busy. Too busy studying. Too busy to go back for their funerals. Is this my life?

Just before I turned sixteen, I moved to Vancouver, Canada from China with my parents. First day of school, I desperately wanted to fit in, but I couldn't understand a thing. Luckily, there was this Chinese kid. He was telling me how he'd been there for six years and how the school worked. Then the teacher called him to speak in front of the room. Even I could tell he was stumbling, not at all colloquial. In fact, in his mumbling words and heavy accent, he kind of sounded like a buffoon. He's been here for six years, I thought to myself. What a failure. I am never going to be like him. In that moment, I made the decision to not speak Chinese, only speak English, and disconnect myself from everything that I thought was a failure.

I'm going to master the English language by the time I graduate high school, I thought to myself. It served me well. I spent that entire summer reading To Kill a Mockingbird page to page, looking up the dictionary twenty times for every page. Within two years, I became the school's debate captain. People told me that I had no accent. Oh my God. That was my ... boy, was I proud. There's just one problem. It didn't really help me with girls. I still didn't know how to talk to them. You see, my way of confessing my crush—she played the trumpet—was to tell the band teacher to move me from trombone, which was on the opposite side of the school band, let me remind you, to playing trumpet just so I could sit next to her and tell her ... exactly nothing. She didn't notice me. Yeah, she didn't notice me. So I thought I just gotta be more successful.

That didn't work either. So what's next? Well, how about entrepreneurship? Oh, that's where I got really hooked. As a freshman, I won the entrepreneurship competition taking home a big check, beating out all the seniors. And before I graduated college, I was worth eight million dollars funded by the best investor in Silicon Valley Y Combinator behind legendary companies like Airbnb and Dropbox. "I'm gonna get you a Ferrari for your twenty-fifth birthday," I told my first girlfriend, bless her heart. And that is until I started failing company after company while everyone around me seemed to be having these multi-billion-dollar successes.

"You are not your company." I found myself at my first session in the Founders Support Group. The truth in their words echoed deep inside me. You see, on the days that the company was doing well, I was on top of the world. I could walk into any bar and to any sexy woman and say, "How you doing?" Until she turned me down anyway, and then I would kick myself in the foot, "I just gotta be more successful, right?" And on days the company wasn't doing well, I didn't wanna get outta bed. The truth is, no matter how it looked on the outside, I was living a permanent baseline experience of failure.

What I hate to admit is that being brought to my knees in the game of entrepreneurship is perhaps the greatest gift for me early in life. You see, life seems to have a habit of teaching me the same lesson over and over and over again until I really, really get it. In the moments that I felt like an utter and complete failure, I gathered just enough humility to discover what else is out there. I went to the Founders Support Group. I read the books, did the workshops and yoga, meditating on death, you know, spirituality, coaching, everything that people do when they're finding themselves unfulfilled and unhappy. I wish I could tell you it was an overnight transformation, but the truth is it took years and years and continues to be an ongoing process. But when I finally got it in my heart and my body, not just at the top of my head, that I am not my company, things started to shift.

I was able to move out of living with coworkers into my own place. I could tell my mom. I'd call her and tell her I love her. I gave myself the permission to be nurtured by Mother Bali just during this global pandemic rather than rush home to San Francisco cos that's where the successful people live! You know, a dear friend and teammate asked me, "Does this mean you're going to quit your company now and become a new musician acrobat?" 'Cause he saw me finding time for myself to learn to play the guitar and dangle women off my bare feet in the amazing practice of acro-yoga, of course. I chuckled at that. I hoped he was not worried about his job.

You see, I'm incredibly fortunate to have a genuine passion in entrepreneurship, that I'd discovered, and in moments that I'm not my company, the natural state of being is to create from a place of love and authenticity rather than strive from a place of fear of unacceptance. When I'm not my company, I get to come to work each day, being inspired by our mission of transforming people's relationship with money rather than burnt out by the anxiety that we may never succeed no matter how hard we try. You see, when I'm not my company, success changes from something that is always in the future permanently doomed to be out of reach to something that is available in the present.

Every moment I live my values of love, growth, authenticity, discipline, and contribution, I get to experience success. And when I'm not my company, I get to have the distinct pleasure of picking up the phone and telling my friends, my dear friends, "Congratulations. I'm so proud of you. I'm so grateful to be on your path."

Thank you very much.