Awakening the Power Between My Legs

Are you ready to take your courageous heart and desire to impact the world to the stage and tell your story?
YES! I am ready!
Description
Speaker
Transcript
Dieke Ter Weel gives a fascinating account of how she journeyed from wanting to be a tough businesswoman in the corporate world to teaching naked yoga. Before traveling, “I didn't speak up for myself, not only in the bedroom but basically also not anywhere else in my life.” During her travels she discovered freedom. Dieke describes the different dances, training, and workshops she attended, which inspired her to follow her intuition. Moving to Bali, she admits she was scared, but “I started to follow that which makes my soul go wild from excitement,” setting up her own business guiding women to unlock their sexuality as she did. 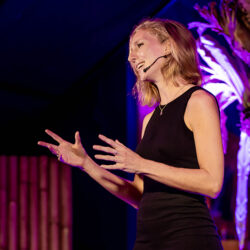 Envying men thinking they had it easy, she changed her mind when she learned what it means to be a woman. “I realized how f**king amazing it is to be a woman!”

Dieke is on a mission to inspire and empower women to connect with their bodies and unlock their innate wisdom, so they can live a life aligned with their soul—a life that makes their soul go “absolutely wild!”

I'm in an open-aired villa in Bali, standing in the garden with my feet on the grass, looking up at the full moon. My left ear is being penetrated by the sound of someone moaning. Almost like someone is about to orgasm. In my right ear, I hear this screaming, slapping sound. Someone is being spanked and REALLY enjoying it. Basically, around me is this sound of laughter, joy, and pleasure. In that moment, I put my hands on my ears, and I'm thinking, Just please make it stop—the sound. Just make it stop. What am I even doing here?

And so this moment marks the end of a two and a half, three-week phase in my life a few years ago back here in Bali that changed my life completely. A year prior to that, I finished my master in innovation management and left traveling because I was inspiring to become this tough-ass businesswoman and career lady. So I thought it was time for an adventure first. At the time, I was doing yin yoga teacher training with Tina Nance, and she kept asking this annoying question, "How much can you feel? How much can you feel? How much can you feel?" In those classes, I was thinking, Seriously, lady, shut up. I can't feel anymore.

Meanwhile, I kept on being invited to all these places I didn't know about. And so I ended up at my very first ecstatic dance where you dance barefoot, no alcohol, no talking. And within five minutes, I was going crazy. I was having the best time of my life. And I felt something just unlocking. And that led me to my very first contact dance, where I ended up rolling around on the floor with a bunch of strangers sweating all over them. And that led me to my very first sacred sexuality temple party. In other words, a sex party.

And so, in that moment, under the full moon, I found myself being triggered by the sound of other people's pleasure. It was in that moment that I realized Tina made an impact. "How much can you feel?" Well, in that moment, I was feeling a lot. I was feeling how deeply blocked I'd been. I didn't voice myself. I didn't moan during sex. I didn't communicate my desires. I was taught to stay quiet and to stay silent. And so that's why during my five-year relationship, I never had an orgasm with him, and he never knew. That's why I thought I was broken. Because I didn't speak up for myself, not only in the bedroom but basically also not anywhere else in my life.

And so, in that moment, I realized that could be different. There was a different world out there, but I was scared shitless because that meant that I had to feel. I had to feel how I've been lying to myself. How I've been pressing away and disregarding this part of me that had been screaming for attention for years. And so, in that moment, under the full moon, tears started rolling down my face in a seemingly endless stream.

Now, the next morning I woke up with what seemed like the biggest hangover I've ever had in my entire life, and not from alcohol but from all the lies I'd been telling myself. But stuff started shifting after that moment, after those few weeks. And I suddenly felt the pull to stop with the birth control pill I had been on for over a decade.

And then I ended up going to all these workshops, trainings, online courses around my menstruation cycle, my body, my intuition, contrast, sexuality. And during that time, I got the idea to teach and host naked yoga workshops. Yes, you heard that right. People without any clothes, bending forwards touching their toes. So how did I end up from studying innovation management to now suddenly wanting to teach naked yoga? What are people going to think? What are my parents going to say? And am I seriously gonna throw away everything that I worked for over the past years?

And so, I found myself back in the Netherlands talking to my mom about this decision that I was about to make. Am I just forgetting about these past three weeks and this past year and just go down the corporate career path? Or am I letting those three weeks in Bali take me onto a whole different path? And in that moment, my mom asked me a question, and it's probably a question you've heard before. "What would you do if money wasn't the issue?" And so that night, I booked my ticket back to Bali.

Two months later, I packed up all the courage I had into a suitcase with no plan, no certainty, no savings. I was feeling scared. I was feeling confused. My friends and family were confused, but I knew I had to go back. And so I got on that plane, and I moved to the other side of the world.

I ended up starting my own business. And from there, step by step, I got onto the path and doing the work and the mission that I'm on today. In those three weeks, what happened is that I got really curious on what made me ME, and it made me realize that I was taught to hide, to blame, and to shame basically everything that was at the core of who I was, that was at the core of being a woman—my menstruation cycle, my body's wisdom, my intuition, and my sexuality.

And so me going off traveling and exploring the world was actually me looking for an initiation into womanhood, for an initiation into being human. And so those three weeks basically blew apart every single structure and belief system that I was taught. Those weeks showed me that there is nothing wrong with me. Like there's nothing wrong with me! It's amazing. And they showed me that freedom exists. And so ever since that moment, I've been following my intuition, picking up breadcrumb after breadcrumb. Ended up from teaching naked yoga to guiding women closer to their bodies, into their intuition, helping them connect to their cycle, and now helping them unlock their sexuality, their core feminine, creative power—the power of their pussy.

So did everything suddenly become easy? Hell no. I still crumble. I've been falling down and getting back up more times than I can count. And still, sometimes I wonder, Wouldn't it just be so much easier to get a normal job? And in those moments, when that happens, I come back to my body, and I ask her, "What is it that you desire?" And every single time, she guides me back on the path that I'm meant to walk.

So world, watch out because I'm on a mission to help every woman ignite the power of her pussy. Because when I did that, I started to radiate and shine and follow my desires. I started to follow that which makes my soul go wild from excitement. I became my most juicy, sexy, authentic self. And I take actions from that place instead of a place of shame and blame. And so now I have the absolute honor to gift that to other women. So women remember this, the core of your power lies in between your legs. So will you meet me there?