SHE is on FIRE, I Will Let HER Speak

Are you ready to take your courageous heart and desire to impact the world to the stage and tell your story?
YES! I am ready!
Description
Speaker
Transcript
Lucie Aujeská tells the harrowing story of being raped while on a spiritual journey to Nepal. After a month, her father rescued her saying, “I don't know what you need to change but change it.” Arriving in Bali, Lucie honestly proclaims, “With a divine orchestration and profound synchronicities, I came here actually to forget about spirituality.” Balinese dancing changed her mind, and she wanted to know all about spirituality and healing. As a yoga teacher, “I was surrounded by epic, amazing human beings . . . who weren't abusing me, who were showering me with so much love.” Lucie discusses her sexuality after she healed and her desire to experience herself through another. 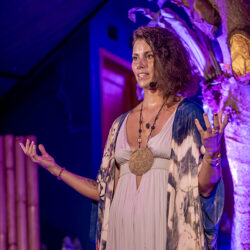 So I would like to share a story with you today about power. And this what you can see - it's not that I'm nervous. It's because my yoni is on fire. But it hasn't been like that always. So I let her now speak.

When I was twenty-two, I ended up in Nepal meeting a guru. I was innocently devoted and dedicated to be the pure tool for good, so I could serve and heal, and I would say, to save this world. How dangerous that can be. So the first day I arrived there, I was taken to his room. And first, his assistant said, "You need to be cleared, so you can work with him." And how was that? I was put onto the bed. He had his hands choking my neck, and he fucked me like a rabbit.

I didn't know what to do. I didn't have anyone there. And no one actually knew where I was because I was told to not say where this sacred pilgrimage would take place. During that month, as much as I had experienced this hardcore abuse, rape, control, and manipulation, in the same time, I had experienced the beauty of the stupa and the people praying there, living in the Buddhist temple, hearing the sound of the gongs. So it was confusing to me. I went back to Czech. I made it home, but I was destroyed.

And there was a moment which was, for me, was the turning point, when I saw another sister was beaten. When another sister was yelled at. When another sister was disempowered. And so I knew in the moment when I was facing death, after not sleeping the whole night as I was cleaning his flat, and I was driving back to my unit, and I fell asleep, and I woke up, and the truck was in front of me. I knew I will either die or I have to get out. It wasn't easy, but I came out. I fell into a deep depression. I really didn't want to be there. I was devastated. And in that time, I received a blessing from my father, picking me up from my room, looking in my eyes and saying, "I don't know what's happening. I don't know what you need to change but change it. And remember, you are my daughter, and we will never give up."

So in the new year under the stars, I said, "Okay, I want to know what a life is. I want to live." And I set myself on a really profound journey. Little did I know what was ahead of me. So not like most people coming here to Bali. With a divine orchestration and profound synchronicities, I came here actually to forget about spirituality. Such a cosmic joke. And I came to study traditional Balinese dance. My child's dream was to just dance. And so I did, and I fulfilled my dream. I danced in a concert in Surabaya. National TV was there. I was in the newspapers. I danced in the exhibition, and I was dancing as a Czech woman traditional Balinese dance.

And then I was even initiated by the priest in a small village, close to the waterfall, to that sacred dance to be the vessel for the divine to transmit its message to the tribe. So then I said, "Okay." In another new year, I said, "I want to know what spirituality is. Show me." In a week I met my teacher. And a few months later, I went to my first yoga teacher training. I was doing yoga from four o'clock in the morning. I was eating just raw food, and I was surrounded by epic, amazing human beings who didn't punish me, who weren't screaming at me, who weren't abusing me, who were showering me with so much love. And I don't know what the space was in that, you know, divine constellation.

But there was one night when in the Anahata Resort, I went down to my room and I just laid down and boom, suddenly I entered the space, the dimension, where I knew myself in all there is. And I knew myself as that profound nothing. And then coming back, I witnessed the formation of this beautiful body. Like, wow, such a miracle. And I took that breath, and here I was again. But different. Something had changed. I didn't have any clue what just happened. I went back up to have dinner, and I was speaking to one of my teachers, Simon, and I was, you know, trying to put it into words, and he was just looking at me. And I just knew in that moment that he can't meet me there.

So from that moment, I was on a high-speed road, like really, really high speed, like the speed of light. And I was like, where is that fan? Like when you're in front of the fan, and everything is shredding away. So I was healing. I was healing, and I was healing. And I just had this love pulsing inside of me. And I didn't have any clue, you know, what to do with it. But then I put it into creating the retreats because I just so felt I wanted to give it to others. Like I wanted others to experience that. So I created the conditions. I created a project called Your Life. So retreats with raw food, yoga, and different healing modalities as I had experienced that magic or miracle through me. Later on, I created a company, which was and still is devoted and dedicated to serve high vibrational plants to bring the health and wealth back into our bodies; to bring back that power into our hands so we can raise and remember that grace. And I saw like, you know, I'm on the purpose. I have nailed it.

But there was that like, "Hey, but what about your sexuality?" You know what I'm speaking about? Right? So I dived in. I dived fully with the desire and knowing that I can, you know, experience myself through another and with the desire that I can experience the good with another. So not just that I could, you know, orgasm by myself, I could like pleasure myself, but then to really surrender into the hands of another. So, tick!

And little I knew that later on, I will meet another guru, and little I knew that that would be the big initiation to really own and claim that divine power, that holy spirit, THE self, or whatever name you want to put on it as me in all its versions. And really receive myself, receive myself fully with all its shadows, with all its light and turn in to that family inside of me, to that holy child, which is quite epic, bringing me all the way here. Same as that orgasmic place, and the presence through which I can deliver this.

And so the last thing. I just saw this quote, and I had to write it down, and it says, "Buddhatvam Yosityonisamasritam." I don't know if I have written it right. It means "Enlightenment is in your yoni." Or like enlightenment is in your sexual organ. So it doesn't matter if it is the yoni or the penis.
But I want to inspire you to really dig in. To come down. So then you can REALLY rise up.