Are you ready to take your courageous heart and desire to impact the world to the stage and tell your story?
YES! I am ready!
Description
Speaker
Transcript
Nadine McNeil draws our attention to the assumptions we make based on what people look like. Moving from Jamaica to Canada and then New York City, she reveals stereotypical comments made to her. Even while working at the UN, she came across limiting beliefs, and when sharing with her colleagues, she’d receive comments such as “They must have been joking.” Nadine agrees with author Chimamanda Adichie that the danger of a single story is it isn’t the complete story of a person. “We treat that person on that basis, and we've lost a whole opportunity to learn so much more.” 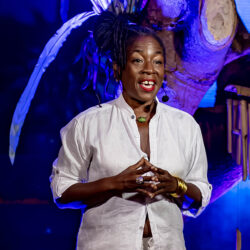 She presents at international conferences such as the BaliSpirit Festival and the Caribbean Yoga Conference, leads corporate workshops at companies such as the Caribbean’s largest money market brokerage—JMMB—and teaches at yoga studios across the globe.

Nadine also implements a variety of programs, classes, and workshops for underserved populations, with past projects in the United States, Jamaica, Haiti, and Africa, contributing to organizations such as the Africa Yoga Project.

As I appear before you, start to notice what impressions begin to form. What does my attire say about me? The sound of my voice, my stature, my skin color? My name is Nadine McNeil. I'm from Jamaica, where I lived until I was sixteen years old. In 1982 I headed off to Ontario, Canada - first time leaving Jamaica - where I would join a private all-girls Catholic school, Holy Name of Mary High School. There were 325 students. Three were black. Tracey, who was born in Canada, who ran track and field, myself, and my Caribbean sister Jackie from Grenada. And we got teased because we had this singsongy voice. Anyway, our fellow students would often ask us, "Did you live in a hut in Jamaica?" or "Did you wear grass skirts?" A couple of years later, I'm living in New York City. Anyone here from New York? Yeah.

So it's rush hour. I'm on the D train, and the train is packed, and we're all like this, and we're right up against each other. And I said something to the woman standing next to me, and she goes, "Bitch get off me. Go back to your country where you came on your banana boat." And I went, "Oh shit." Now what was interesting was that woman and I shared a skin color. So, then I began to understand what the term racialism means. Racialism is essentially a softer version of racism, but there are more nuances that are mixed up in it. And so began my story of internalizing, silencing stereotypes, labels, identity. This would continue throughout my life. And even when I worked at the United Nations, an organization whose premise is founded on equality and inclusion, I would meet these statements and these stereotypes and these limiting beliefs.

And then, when I would try to share with my colleagues my experience, I'd get about three responses. One would be, "Are you sure you heard correctly?" The other one would be, "Nah, that's not what they meant." The third one would be, "They must have been joking." So I was gaslit up the yin yang.

You know, coming from Jamaica - I'm an only child - I was raised by two married parents. And up until that point, moving to Canada and then New York, I identified with my high school where I lived. The values my parents instilled in me were study hard, work hard, do unto others as you would have them do unto you. And for God's sakes, don't get pregnant out of wedlock.

So my call to action standing here before you is that we start to pause. Think about the labels that we identify ourselves with, the assumptions we make based on what people look like. Nadine McNeil educated in Canada, the United States, and Europe. My CV arrives across your desk. And then I come through the door. "Oh shit. How do I put these two things together?" This is what happens when we fall into the danger of a single story. A Nigerian author, Chimamanda Adichie, talks about this. And she says the danger of the single story is not so much that it's inaccurate. It's the fact that it's incomplete. So we see someone, we make some decisions and assumptions about that person. We treat that person on that basis, and we've lost a whole opportunity to learn so much more.

My repeated experience, no matter where I've lived in the world, is that ultimately we all want to be seen, heard, and loved. Thank you very much.