Are you ready to take your courageous heart and desire to impact the world to the stage and tell your story?
YES! I am ready!
Description
Speaker
Transcript
Gandi starts his moving talk with very happy memories of his childhood. From a small village in Bali, he helped his father working in rice paddies. As well as assisting his parents, he looked after his sister. And all the while, Gandi also had to deal with society’s rejection of him. Gandi speaks openly about the effect this had on him and how he prayed. “ . . . I don't know what to do. God, please help me.” And he got an answer. "I'm with you. You don't have to worry about it.” Gandi became stronger. And seeing people “from different countries and with different upbringings” coming to Bali has also had a big impact. 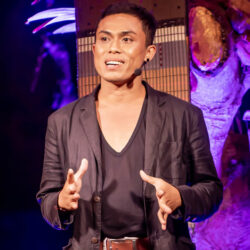 Two freshly luminous green frangipani leaves clenching one another. I had those memories of playing shadow puppets when I was little. Also, I had vivid memories of cycling with my father, cruising around the village when my feet were entangled. And I do remember my father used a dry banana leaf just to tie up my feet. Oh my God, I was so happy. He did this because he wanted me to be safe and sound because otherwise, I was gonna fall off. In the rainy season, my father dug the ground and made a reservoir, so when the rain fell down, the water was reserved in that reservoir. You know what I did? I jumped in with an exuberant face, totally naked. I can't swim. I was on my father's back. And we swam together.

And beside the reservoir, there was a kind of vineyard. Not a vineyard as we didn't have a vineyard on our land. It kind of looked like a vineyard, but I still remember the taste of the fruit. It was sour, sweet, and a little bit salty. And that's how my story begins. So I'm so honored to be standing here to be delivering my own storyline, my story of life. And thanks to Colleen. I think this is not a coincidental encounter meeting Colleen. I also believe in everyone else here. I'm so honored, so privileged to be standing here. Regardless of my shortcomings, I wanna come up with alliance, with a conclusion with all of you here who feel empathy and see the silver lining—the true colors of me.

This is me. My name is Gandi. I'm from the small village on the northern side of Bali called Singaraja. My village lies on the northern side of Singaraja city, so twenty-five kilometers from the city. So the vast majority people living there are fishing and farming like my father. He's a farmer. He's the breadwinner in our family. He used to walk hard and spend his whole time in the rice field just to plant rice. As a little child beside my father, I helped him to plant rice in the paddies in order to fulfill our basic necessities. You know what? I'm so privileged. I'm so happy. And I'm so grateful to be living in this sacred and humble upbringing. My mother was just an ordinary housewife. She didn't earn money, but she helped us to grow. She provided food, and she helped alongside my father. You know what? We were living a very simple life where everything was basic.

I had an idea to help my parents. I was also a breadwinner in my family because as a child—besides schooling—I had to wake up super early in the morning, around four or five, just to collect the tamarind. You guys know tamarind, right? It falls from the trees. And we sold it. It wasn't not good money, but at least I was so happy because I helped my parents in making a living. In the other season, we also had cashew nut trees. And I went there as a child. "I'm so happy. I'm gonna run. I'm gonna run." So I collected them. You know, the fact is that cashew nuts are more expensive than tamarind and easier to sell because with tamarind you have to break it before you sell it. And I was a happy child with an impulsive mind.

I came up with so many ideas, but things go up and down. I have a sister. So there are four children in my family. I have two sisters and one brother. And I'm the last. I'm the Ketut. You know? Everyone knows that the last child is Ketut. I'm Ketut Gandi. So usually, my parents, especially my siblings, were elated with me. But things go up and down. I had to look after my sister, my first sister. She has a mental illness. She's a woman who is not speaking. She lives in silence. She's not speaking at all. She just sits down with nothing to do. So I was a child with a very good energy. I helped my sister. I fed her and showered her, and I was happy at the time. But I had a very relentless life because I had to deal with society's rejection because I'm gay. And they bullied me since I was little. And I had to deal with my family's issues. And I had to look after my sister. I thought it just was so relentless. And what should I do? You know?

My parents once asked me, "Gandi, what you wanna be in the future when you grow up?" I said, "I don't know." I had, I think, unrealistic dreams, and they directly answered, "You have to be in the army because you're strong. Your body's meant to be in the army." I think No, man. I'm a gay guy. How do I come up with this? This was so funny. And I didn't hear them. I just disobeyed them with those words.

So long story short, you know, I'm indebted to those two fruits, tamarind and cashew nuts. I'm so indebted to them because they're my jewels. You know, because of them I lived. I survived.

There comes a day, there comes a time, when I do fully realize there I am gay. You know what? As a Balinese, it's really hard. When you are a gay guy, you have to deal with so many rejections especially coming from this society. Because when they know, when they notice that you are a gay guy, they're gonna keep their distance. They're not gonna come to you and say, "Hi." They're gonna go away.

So at the time, I was feeling alone. I was lonely, to be honest. I was abandoned. I had a lovely cousin who passed away. We used to be together since we were little, and he passed away. And my brother and sister went away. There was only one, the first sister, with me because I had to look after her. And I was crying a lot. I was hidden, you know. I didn't wanna come out. I didn't even wanna go out. I was focusing on my studying because I was sad. I was crying a lot. So many rejections, and to build up self-esteem is really hard without any support because my parents are very conservative parents where they taught me about living in that cage. You know what I mean? Like we have certain rules that are Balinese and passed down to all the generations. So I had to follow those rules. So I don't have any freedom. I can't liberate myself or free myself. So I was kind of literally stuck and had nothing to do.

And when I made a mistake, my parents, especially my father, he punished me with relentless tasks because we were . . . sorry, guys. I don't want to emphasize this, but Indonesia was colonized by the Dutch at the time. Right? And he used to give very relentless punishments. And when my father was a child, he used to be tied with rope and hung on a tree because of my grandfather. So, you know, for around seven hours because he had made a mistake and ants came and just scattered all over his body. So those rules were passing down to me.

So I was so tough at the time. I was so strong. But, you know, in order to not just be sad all the time because of my hardships and all the burdens that I went through, I kept praying, "God, show me the way. Am I destined to be like this? To be a gay guy who got rejected from society. Who has so many insecurities. I don't know which direction I should take because I am living in poverty.
I don't have people supporting me. I don't know what to do. God, please help me." And then I saw the end of the tunnel, the things I had prayed for—a divine spirit of light. So sacred. It approached me and said, "I'm with you. You don't have to worry about it. I'm embracing you. I'm gonna lift you off the universe." And I was like, Oh my God, this is such profound energy that came into my life. And I had no idea. What is this? I was a seventeen-year-old boy. Okay. I'm gonna be strong. I'm not gonna let myself down. And then, from that moment, I'm stronger. I'm tougher.

Sometimes I would imagine myself traveling across the universe and see my other persona lift and support me, support each other. I came up with that idea. This is like a weird story, but you guys get that right? And about being rejected as a gay guy, I don't care about society anymore because I came up with self-gratitude, motivation, and kindness. Everyone who sees me as a queer, that's just your problem. It's not my problem because you have to know that we are full of a variety of colors like a rainbow. We see these people coming from different countries and different upbringings. So I don't care about it. I don't need to emphasize that anymore. I'm strong enough now.

Viola Davis once said, "There is one place where the people with the greatest talent are gathered. One place, and that is the graveyard." Yes. Right? "Viola, what kind of story do you wanna tell?" Viola said, "Exhume those stories. Exhume those bodies." And now I'm representing myself exhuming my own stories.