Are you ready to take your courageous heart and desire to impact the world to the stage and tell your story?
YES! I am ready!
Description
Speaker
Transcript
Nadira Ayza very honestly tells us how her previous fear of death led to a complete change. With warnings of a tsunami, “In the midst of my fear of my anxiety, and let's be honest, my mortality crisis . . . in the face of my death, what affairs do I need to get in order?” Nadira reveals a big problem through childhood and how it continued while she was at university. But working on it, “I started expressing my desires, even though I know it may hurt others.” Now instead of fearing death, Nadira says, “I am proud of how I've lived my life, and I'm ready when the day comes.” 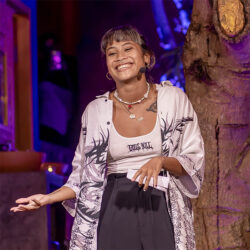 Faced with the probability of my own death. Your face did not graze the stew of memories I needed to recollect in search of something greater than myself. No words or feelings or last goodbyes to be turned into lines of a memoir.

Sunday 9th of August 2020. I'm frantically riding my Honda C70 toward my last hope—the one person that can tell me if I'm going to die soon or not. Twenty-four hours prior, my friend said to me, "There's a tsunami coming in the next week. It's heading towards Canggu. I'm packing my bags now. I'm going to Ubud. We have to go.”

My mind is trying to wrap itself around the news that I'm now hearing through the mouth of my best friend. Where I come from, I do not take these things lightly. I come from a half-Japanese family, and I grew up with old magic. So unexplainable occurrences like this does not come as a surprise anymore. Growing up with old magic means when I was a kid, I wouldn't go to the doctor's. My dad would just get an energy scan on my back and tell me what's up. He'd put his hand on my shoulder and heal me.

For a dinnertime topic, the one thing I've always asked my dad to repeat over and over again is his old ghost-busting stories from when he was still in university. When other kids would go up to their parents and tell them about the ghost under their bed, they would normally get "Ghosts aren't real, kid." But when I do that, I get, "Oh yeah, yeah. There's a couple in your room." Please don't ever say that. It's terrifying.

And history lessons weren't as fun because on family vacations, my dad would like to take us to these old historical sites around Indonesia, and there are many. He would touch the broken stone temples and tell us of the visions he sees from days long past. Now that is a history lesson. So anyways, warning calls —they're just naturally part of my life.

Fate does not need to make sense for it to happen through the cracks. Even if their words mean nothing to your ears, prophecies aren't made to be easy.

That evening I typed up the most ridiculous message in my family group chat. It went, "Hey guys, I might be dead in a couple of days. Something about a tsunami—11th, 15th. Okay, I need answers. Dad, do you see anything?" A couple of minutes later, my dad replies, "Nope." All Dad can see was a fire on the 11th. No tsunami, no earthquake. I'm not satisfied.

So I tracked down all the other seers I knew in my life, which were actually plenty. That's when I realized that I'm a pretty odd child. That's a lie—I've known that forever. And I tried to gather up as much information as I can. So after hours and hours of frantic searching, the conclusion was inconclusive!

So again, I'm on my Honda driving to my gifted friend, the woman that I'm pretty sure has the answers that I'm looking for, which is, "Am I gonna die? Is everyone I know around gonna die? What's gonna happen?"

And when the answers arose, the sense of, I guess, calm washed over me. 'Cause I realized the answer to those three questions were nothing, no one, and nothing again.

And it wasn't always this way. Backstory. As a child, I developed a problem with lying, as I think all kids do, but in my teens, it developed into something bigger cos at one point, I realized I was a full-blown compulsive liar. I think it was, in some sense, my own way of surviving my parents.

Aside from them being magic, they're also Asian. So growing up with Asian parents, being somewhat culturally rebellious, you could say, yeah, a rebellious kid requires a lot of fiction at play, and it would start with just the basic things like where I've been, who I was with. And then it slowly just progressed into more frequent unnecessary lies, like what I had for lunch. I don't know why I felt the need to lie about that. "I had a steak." With what money?

So I have a lot of anxiety, right? And as a person that has a lot of anxiety, trying to keep track and trying to constantly be accountable for these lies becomes just completely unbearable. I noticed a lot of my crippling anxiety stemmed from the web of lies that I've curated for absolutely no reason. And at one point, I just thought like it's enough. "I don't wanna do this anymore."

And by university, it was hindering my life. I'm eighteen at university. In a new city, living my own life. I'm a teenager. I'm trying to find out who I am as a person, but anxiety kept holding me down, and it would be honestly the absolutely stupidest things. I would tell different stories to different people. I would give different details to certain events and situations. I would retell the same events in a multitude of versions. And it would be the stupidest details ever. Like, "Oh yeah, I went to a party in a pink dress." The next day it's "Oh no, that party, I was in white." It just made no sense to me. In Indo, we call it boom boo. It's just little spices just to add to my stories. But at one point, I was like, "I don't know what the fuck I'm saying anymore." And nobody does either.

So anyways, all that was just completely hindering me. And I started working towards making small changes to fix it. I realized anxiety is the biggest thing right now. I need to like tone that down. What's the biggest thing? Lying. Okay. Lying was the first thing that had to go. And what that did was it took a while. But eventually, I stopped telling people what they wanted to hear. And even when it was uncomfortable, especially when it was uncomfortable. Like when my mom would call me up and ask me, "Why aren't you praying anymore? Why haven't you prayed for a while?" I would tell her what I think about Islam. When my friend calls me why I'm thirty minutes late to this meeting, instead of blaming the traffic, I tell her that I got lost on Instagram, which happens to the best of us.

The point of it is I stopped being a people pleaser. And I started expressing my desires, even though I know it may hurt others, and a lot of the time it does. But on the other hand, when I find someone attractive, I will go up and tell them even if it's across the street, across the bar, my neighbor. I'm gonna go up to them and tell them, "You're attractive. You're beautiful." Sometimes it would get me numbers. So that's great. That's a good tip. But other times, it just gets a smile, and that's all good too. And when I love someone, I would always make sure that they know it and they feel it, which I think is super important.

I guess I took the more tender textured road with honesty than the more comfortable one with lying. I realized I started becoming the woman I've always wanted to be. And it feels amazing. I've expressed everything I need to, to the people in my life. Like every conversation has been had. Every word has been said. Everyone I love knows that I love them. And in turn, everyone in my life knows me. Like the real me, not just some made-up version. I've been living my truth mostly—cos we all have our setbacks—for the past five years, and I have nothing to hide anymore.

It's like this total weightless, unapologetic freedom. So let's go back to our story. I went to see this woman. I went to see my gifted friend, and the meeting went well. What does that even mean?! But yeah, the meeting went well. She explained to me what the prophecy meant with the tsunami that all these other people were seeing and the symbolisms behind it. And she told me that we are physically safe for now. There's more to it, but I don't have time to get into that whole story.

But what I realized at that point, after she said that, after that drive, I was, "You know what? It doesn't matter anymore because come what may I know who I am. I am proud of how I've lived my life, and I'm ready when the day comes.”