Asking for Help and Getting a Piece of Myself Back

Are you ready to take your courageous heart and desire to impact the world to the stage and tell your story?
YES! I am ready!
Description
Speaker
Transcript
This is a very poignant talk by Cory Benjamin. Severely injured, he describes months lying in a hospital bed, unable to walk. Cory honestly tells how from being a highly independent man, he now had to rely totally on others. “So this transition that happened so fast, it was very jarring.” He recalls his long, slow, arduous recovery and how hard he was on himself. “I kind of criticized and, I guess, tortured myself mentally for asking for help.” He also felt he was hard on the nurses, and after recovering, Cory returned. "Ma'am, I'm so sorry for being such an asshole," he said to one. Of course, no apology was ever needed. 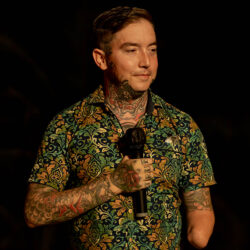 So let's go ahead and address the elephant in the room. I know what the burning question is and, yes, I do give fifty percent off all manicures. And I think that's worth it. It's fine. Okay, now that the mood is a little bit light, let's go ahead and get down to the brass tacks.

On August 28th, 2011, I opened my eyes to white fluorescent lights—confused, dazed. I can't move my mouth. I can't talk. My eyes are darting from side to side. What is going on? A nurse walks into the room—her eyes just as surprised as mine. She looks at me. I look at her. She darts out of the room. The next thing, a man walks in wearing a white lab coat. Comes in. Pulls a breathing tube out of me. He says, "You're gonna be all right, son. Welcome back." Moments later, I pass out. Next time I wake up, it's not a doctor I see. It's my family. It's my mom. I'm still confused. I have no idea what's happened. "What's going on?" I say with a raspy voice. "Where am I? What's going on?" My mom leans in, gives me a kiss on the forehead, and says, "Sweetheart, it's gonna be okay. You're gonna be all right."

The extent of my injuries was very, very severe. And I had a long, arduous task of recovery ahead of me. I went from being this very independent, successful military man to someone who was completely now dependent on the people around me. And so this transition that happened so fast, it was very jarring, to say the least. And I was very angry. And when I say angry, I mean, I was an asshole.

To this day, I still feel sorry for those nurses that had to deal with me and my grumpiness because it'd be 3:00 a.m. I still hadn't had the strength to lift my arms up and scratch my head. 3:00 a.m. in a medical ward, "Nurse, nurse, nurse." I got other military guys telling me, "Casio, shut up." I'm like, "Man, my head itches. Please, nurse, please come scratch my head."

Months would go on, and slowly I would regain functionality in my legs. And then the day came when this one big heavyset black African American man and another African American woman stood me up for the first time in six months. And I'm screaming at them. "I can't do this. I cannot do this. This hurts. Put me back." And they yelled back at me, "You're gonna do it, man. You're gonna do it, sweetheart."

And this repeats itself for the next three months every day until eventually, I'm walking back. One step, two steps, three steps. “Okay, that's enough for today. I'm gonna go sit down, back in bed, and go back to sleep. Maybe tomorrow we'll double that.”

I went from being this really independent man to relying on people. And that was a very hard transition. And at the time, I kind of criticized and, I guess, tortured myself mentally for asking for help.

But eventually, after months, I could walk out of that hospital on my own. And then I got a piece of myself back, which was nice because once I could finally walk back into that hospital, find those nurses that put up with all my bullshit. I went up to this one woman who was there the whole time when I was there. I was like, "Ma'am, I'm so sorry for being such an asshole." She's like, "Hey, sweetheart." She's from southern Florida. She's got a nice thick Southern accent. She's like, "Sweetheart, you don't have to apologize for anything. You were one of the good ones." We embraced. Finally, said our final goodbyes, and that was it. And here I am today, standing in front of you all.