Purging the Armour, Leaving the Cage

Are you ready to take your courageous heart and desire to impact the world to the stage and tell your story?
YES! I am ready!
Description
Speaker
Transcript
Melvin Hart tells us conversations he had with other versions of himself after taking ayahuasca. The medicine brought him back to several incidents in his life, all of which he details in this talk. He goes back to his unjust incarceration, seeing his dead father, and an incident while in solitary confinement. Back in New York, while admiring his many beautiful possessions, his teenage self asked, “What happened to adventures?” Returning to Peru, he tells how he became a facilitator at a retreat to then operating one. But “I realized I put myself in another cage.” Even after many ceremonies with ayahuasca, it’s a meeting with a stranger which had a profound effect on him. 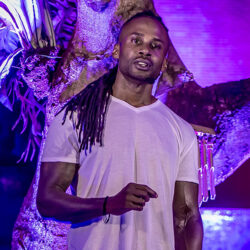 Dressed in all white, sitting cross-legged on this mat, waiting for the shaman to call my name up for my fifth cup of ayahuasca - it's my fifth ayahuasca journey. Waiting. No nervousness. I did this four times already. I know what to expect.

He calls me up. I pop up off my mat with this arrogance, with this lack of humility, with this overly confident asshole kind of vibe that only a native New Yorker who has a penthouse in Manhattan, fancy clothes, all the trappings of a posh life that you could have. I approached the shaman and his facilitators. He hands me the cup with two hands with all this reverence, and I look down at him. I don't even sit. I kind of bend down a little bit. I take the cup with one hand and look at him in his eyes. And he's like, "Take a second, brother, bond with the cup, set your intentions, breathe."

I look at him in his eyes, and I'm like, "Cool, here we go. There you go, champ." I make my way back to my mat. Sit down. Ten minutes goes by. I feel the medicine snaking through my system. You guys know. You guys know what that feels like, right? I feel the beads of sweat. I'm like, All right, heating up a little bit. It's about to hit me. That fucking medicine hit me like Thor's hammer. Bonzai! I lay on the mat.

It takes me right back to the eighteen-year-old me standing in a courtroom looking at a judge. "What? What'd you say?" "Guilty." Wrongly imprisoned at eighteen years old. Sentenced to eight years in a New York state prison. I turn around. Look at my father. See the utter look of powerlessness on his face that he can't save his boy. I see my mother, and I can just feel her heart just contract. I look at myself, the eighteen-year-old and I see him just fall to pieces.

Another wave of the medicine hits me. It takes me to the nine-year-old me. Seeing my first murder and my father standing over the guy as I watched the life go out of his eyes. He said, "You see, son, that's a crackhead. Don't do drugs. Come on, let's get a hot dog."

Bang! Another wave of the medicine hits me. It takes me to the twenty-one-year-old me on my 87th day straight in solitary confinement, standing at my gate, waiting for the officer to give me my lunch. And he looks at me, at my eyes. He spits in my food, says "It looks like it could use a little seasoning." I smile back at him and slap the tray back on his pants and go lie down. I won't be eating for the rest of the day.

Bang! Another wave of the medicine hits me. It takes me to the twenty-seven-year-old version of myself standing over my father's lifeless body. He just died a few hours ago, and I wouldn't let the coroner come see. I wanted to see how he died. And as I looked down at him, I didn't even know what to feel. I couldn't even cry. I just looked at him. Then two days later, me walking my sister down the aisle to give her away at her own wedding.

As I laid down on that mat . . . well, actually I couldn't be lying down 'cause I was purging. Everything was coming up. Everything. When there was no more liquid in my body, it was just that deep, dark black, dry heaving. I was making sounds that I did not think that I was capable of making. Getting it all into this bucket, shaking and crying and screaming. I lost my shit. That ceremony lasted till about 4.00 p.m. the next day. Just an agony. And throughout that whole experience of me seeing all of these formative events, I just asked, "Why?" Not "Why me?" Because self-pity is a luxury that I could no longer afford. I was asking, "Why? Why are you showing me this?" The medicine told me, "I'm just showing you this to show you who you became."

Fast forward. I'm back in New York in my apartment. Living my life. You see, when I went to Peru, I weighed 185 pounds. I was jacked, jacked! All right? I left that retreat ten days later, weighing 165 pounds. And I realized that I lost 15 pounds of fury, not anger. Anger's too simple. Fury. Cold fury that I was ready to unleash at the drop of a dime. If you looked at me wrong, ooh! And I sat in that apartment with my expensive rugs, custom-made mirrors, sharp lights, all of that. I was like, No, you did all right for yourself, though. Fuck 'em. You're here now. None of that shit matters. Yeah. None of it matters.

Until I was smoking a spliff at 11.00 a.m. on a Wednesday. I'll never forget it. My penthouse overlooked the Empire State Building. So I was looking at the Empire State Building. Looked back into these big beautiful windows, saw my rugs, my tables, my chairs, my lights. And I was like, No, you did your damn thing. You're all right. You're good, man. So I said to myself, Well, what would the twenty-three-year-old prison version of Melvin think of who I've become? So I went to him, and I was like, "What do you think?" He's like, "Oh, you're doing your thing, man. Look at you. You're on top of the world. You have everything that we wanted."

Because when I was in prison, guys had pictures of women in bikinis and all of these things. Not me. I had rugs. I had flatware. I remember one of my guys walked by my cell, and he's like, "Yo, what? You gay?" And I was like, "What do you mean?" And he's like, "What's with all this shit on your wall? I was like, "No, this is all the stuff that I'm gonna have." The twenty-three-year-old version of me was very satisfied.

So then I went back. So, well, let me ask the thirteen-year-old version of me. And I looked at the boy who I was, and I said, "Hey, look, this is me. Got cool dreads. Got a little beard. Got some muscles. I got cool shit." And the little boy looked at me, and he said, "But who are you?" And I was like, "I'm you. Look, we have the same scars. We look exactly the same." He said, "You're not me. You're my betrayer. What happened to our dreams? What happened to being like Indiana Jones? What happened to adventures? What happened to all of that stuff? Look at this." And I looked at my apartment, and it took me all the way back to my fifth ceremony when I was purging up all of that armor that I had on, all this bravado, all of this kind of insecurity, lack of confidence, lack of self-worth. Because to that version of myself, that's what the world taught me I was, and I needed to have these things in order to become somebody of repute.

In that instance of me standing on my balcony, looking in my apartment, I shook my head, and I was like, Yeah, you did good, but we're done. This is done. Let's get outta here.

Three months later, I find myself back in Peru. Invited to come and live, to study the medicine, to become initiated under their mesa, but actually to go deeper into my own journey, to see who I really am because all of those external trappings that I accumulated actually blinded me to who I really was. Those were just another form of armor to keep me from getting to my own truth.

So I go into my initiation. Ten-day tobacco diet in isolation. I've done 270 days straight in isolation in prison. Ten days is nothing. I could do that on my head. What? I don't have any books either? That's fine. Don't worry about it. And I went from somebody who was the facilitator first, cleaning up your purge buckets, walking you to the bathroom, rubbing your back, holding your hair back when you were purging to holding my own retreats and operating my own mesa and pouring my own medicine.

And after three years of that, I realized I put myself in another cage because you had to come to the mountain to see me. And it was quite easy for me to throw thunderbolts down from Mount Pious. "Drink clean water. Yeah, no, you shouldn't eat junk food." I grew my own food there. Right? What I realized, though, is that there was a dissonance. It's all well and good to be at a retreat or hiding out somewhere, sequestering yourself and wielding your medicine. But how effective are you wielding that medicine in the "real world?"

So I found myself back in my old neighborhood in Chelsea, walking down 23rd Street, fresh off a flight, fresh from JFK, going to see a client. 'Cause, that's what I do. And there was a woman standing on the corner of 23rd and 6th Avenue, and she was asking for help. And everybody had their headphones in. People were looking at her. Thought she was homeless. Kind of ignored her. And I walked right over to her, and I said, "You need some help?" She said, "Yeah, I'm looking for Burlington Coat Factory." And I was like, "Yeah, it's right across the street. Look." And she was like, "Yeah, if I could see, I wouldn't be asking you for help. I'm blind." And I was like, "Oh, well here, come on. Let's go." So I walk her across the street. "Why are you going to Burlington Coat Factory?" "Oh, I got invited to a wedding. I want to get my niece a nice present."

I thought that this journey was this path of spirituality. This path of oneness, this path of shamanism, mysticism, all of that. Not for me. It's just a path to remind me to remember who I really am. I've been called a lot of things in my life. A shaman, a healer, a good therapist, Hartzog, 98A3345, an asshole, nigger, piece of shit, servant, useful. But what do I call myself? I'm just Melvin, the widow's son. Thank you.