Your Pain is Your Power

Are you ready to take your courageous heart and desire to impact the world to the stage and tell your story?
YES! I am ready!
Description
Speaker
Transcript
Ling Lai tells five awesome stories of her life according to the five beds where they took place. A successful student with a promising career in China, she had it all. But her first love affair brought serious consequences, and she left her home for years. After returning to China, circumstances once again lead her to leave for Europe, where she is “Jobless, penniless, homeless, a single mom.” Ling shares the experiences she had with a man and conversations with her mom, which led to her creating a successful business. Now she leads the life in Bali that she had dreamed about during her time in Europe. 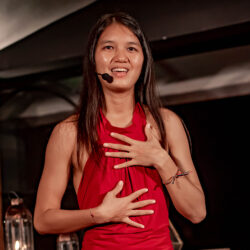 "Mommy? Can you tell me a story?" My head just hit the pillow when my six-year-old daughter asked me the same question every single night. I was so sleepy. All that I could think of was bed. So I told her, "Okay, I'm gonna tell you five stories of my life that happens on five beds."

The first story, the first bed, is my childhood bed. It's the bed where my mom and I would cuddle every night, and she would tell me bedtime stories. But my mom was always so exhausted after a long working day that she would always tell me incoherent stories. And I was always correcting her. "Hey, Mommy, it's not right. The person you talk about now already died. How come she came back to life?" Little did I know at the time that people we thought were gone can and do come back.

The second bed was a death bed. Nineteen-year-old me was lying on an operation bed, legs wide open. "It's done. You can get up and go now," the doctor said. One month before this, I was a sophomore at the top university in China. And I had just been elected as the president for the biggest association in college. I also started my first love affair ever with an English lawyer. For the first time in my life, I invited a man between my legs and had wild ecstatic sex in the heat of which I unconsciously created a baby. This man, who asked me to marry him few weeks ago, never saw me again since he knew I was pregnant. I stumbled out of the operation room into the arms of my mom, who was trying to hold her tears back. I knew something between my legs has changed forever. I went from top student to scandal. A shame for my family and my community.

However, as my good girl mask got torn up with my yoni that got torn in the abortion, the old me died with my baby, and the new me was coming into being. So I ran away from classrooms into the wild, into my wildness to find myself and to heal. I started doing yoga and qigong daily. I went to nature adventure clubs. I became a vegan. I left my promising career opportunities in China and went to Europe in search of a new landscape, a new lifestyle, a new identity. People said, "Sometimes you have to leave in order to come back."

After five years of world travel, I came back to China, the land where I was born, and I found myself on the third bed. Twenty-four-year-old me lying on the small bed at home, legs wide open again. Only this time to give birth to my baby girl. It's seven long hours after my water broke. I've done everything the midwife told me to do. I held onto the thigh of my husband and the bed. I groaned. I pushed. I was exhausted. My baby was not coming. My husband and my friends, who had been cheering me on for the last seven hours, had now become quiet. "It's too long. She needs to be taken to the hospital," the midwife said. All my life, I've shut myself down, swallowed, digested, and accepted everything. But at this moment, I knew if I don't speak up, there's no way I can birth this baby. I would die in the hospital.

So I finally had the courage to say, "I don't think the midwife's way works for me." A woman came to my ears, and she said, "If so, just do it your way." I felt blood rush back to my veins again while I felt still weak. So I asked with the last ounce of energy I still had, "Could you please gimme some encouragement?" And now they all went, "You are doing great. You're amazing. I can see the baby's hand already!" I took a long deep breath and one last roar. It felt like the biggest poop of my life just got squeezed out of my yoni. And there was my baby—only she's shining like gold, and she smells great.

I'm so happy that I gave a much better birth to my baby than my mom to me. My mom had such a traumatic birth experience with me that she thought I would go through exactly the same. Looks like I defied her prophecy.

Soon I realized I was married to a man who was exactly like my dad—abusive, violent, dependent on me for money, gave me sexual trauma. And that made me feel worse than a prostitute in my own marriage. I was determined not to repeat the history of my mom. So I left my husband, my job, my house, everything I had in China again and went to Europe to heal myself. In the worst days in Europe, I was picking up horse shit for $10 per hour—one arm with my baby sucking my breast. And I remember five years ago, I was the top student in Cambridge, hanging out with Oxford and Harvard friends who got $1 million job offers right after graduation. And now here I was—jobless, penniless, homeless, a single mom. I was the most unattractive woman I knew.

Until I met Barack. I was pouring my heart out desperately on the piano in the museum when Barack, a single dad from Turkey, walked in with his son and saw me. Two months later, we were in bed in his flat, having the most epic savage cathartic sex of our lives. I was having mind-blowing heart and ass opening, bed rattling, neighbors complaining, and soul stretching liquid explosions of orgasms of my life.

In that worst period of my life, outside of that bed of orgasm, I felt totally worthless—ugly, the smelliest piece of shit. But Barack? He fucked the shit out of me. He penetrated me to the core and unleashed that lioness that'd been sleeping there all along. And he told me, "You gave me the best sex in my life." And later, only later, I knew from friends that actually every man says that to every woman, but I chose to believe him. And I thought, maybe I'm really good at this. So I got out of bed, went to my desk, and wrote down every single detail of the orgasms and pains of my yoni. And I shared it on social media.

Now, this is such a taboo in China that it went viral very soon. So I created my holistic sexuality course for women in China. And in one year, I went from zero to my first one thousand clients. From zero to my first six figures. I got on TV, in newspapers, magazines. My business was growing wild, like my baby, but my relationship with men is—I wouldn't say a contrast to my business success—but it's like sex. It's in, out in out. I really wanna stay in longer, but I'm mostly out.

And one night after yet another devastating breakup, instead of just looking on Tinder for another guy to give me some love, I called my mom. "Mom, can you tell me your story of your yoni?" My mom told me everything—her yoni, her mom's yoni, her love stories, her pains—with tears and a lot of joy because finally, someone cares. We became friends again. I taught her yoga, dance, couch surfing, and BDSM. She came to my tantric classes in a women's temple. And with my help, ten years after the day she was almost bitten to death by my dad, she found the love of her life, who was a Danish hippie. And they just celebrated their fourth wedding anniversary.

My last bed is the bed at the very beginning of my talk, where my daughter and I would cuddle and tell bedtime stories. So she asked me to tell her a story, and I told her the story I told you tonight. And when she heard the part about my first baby who died in the abortion, guess what she said. "Mommy, that was me." So twenty-five years after the incoherent bedtime stories of my mom, I finally realized that people that we thought were gone can and do come back.

My yoni, which has been the greatest source of shame and pain in my life, has now become the greatest source of power that created a baby, created a six-figure income, a business that gets a lot of yonis well fucked by life and a time location free life here in paradise Bali, which is exactly the life I dreamed of five years ago when I was picking up horse shit. So my shit has become my gold. My greatest pain has become my greatest power. So can yours.