Are you ready to take your courageous heart and desire to impact the world to the stage and tell your story?
YES! I am ready!
Description
Speaker
Transcript
When he was thirteen, Sergio Morales told his mother he was an atheist. He felt that religious people needed to be told how to behave or “They would act like pricks.” Despite having tons of questions about God, he buried them. Later, Sergio became addicted to pleasure, and later still, was introduced to yoga. He says he felt “Blessed and in touch with a universe that surrounded me while smoking the second joint of the day.” Admitting an indiscretion to his girlfriend, guilt and self-doubt stayed with him for a long time. Eventually, he found a way to start trusting himself again, got his confidence back, and regained his faith. 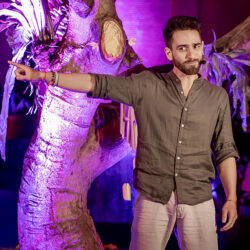 I remember the day I came out to my mother. We were both sitting across from each other at the kitchen table where we normally ate. Gravely I mentioned there was something important that I needed to tell her while struggling to hide the nervous mix of misdirected anger and anticipation pumping through my veins. "Mother, I'm an atheist," I told her. And as the words rolled down my tongue, I could feel the liberating joy that every self-respecting teenager experiences when making a stance against anything their parents stand for. Mind you, this word 'atheist' I had just heard for the first time just a few weeks earlier.

And for long nights afterward, lying awake on my bed, staring at the ceiling, I kept pondering about its meaning and the implications of this word. Was there really no God? It's impossible. Especially when considering that I have never directly experienced anything remotely close to my preconceived ideas of what God looked like. And to make matters worse it wasn't the first time my parents had lied or been wrong about something. So after having survived the traumatizing truths of Santa Claus in childhood life, I didn't want to be taken for a fool anymore.

You see, in my head, those who professed their religion did it because 1, they needed to be told how to behave. Otherwise, they would act like pricks. And 2, they were so afraid of their own death that this was the only way they knew how to find solace. At thirteen, I knew better than that.

So I went through life thinking myself better than those around me, clutching to the identity I had crafted for myself. That of a hardened rationalist who pretended to be smart enough to understand Nietzsche's rhetoric without having picked up a single one of his books, let alone write the man's full name from memory. Now I never much believed in the Catholic view of an afterlife, but nobody ever told me about the sinking feeling in my chest that accompanied the anxiety-inducing thoughts of my own death. Scared as I was of my own questions, I kept burying them deep inside me because I was an atheist, dang it. And life is hard. Everything is meaningless. The cake is a lie, and I better man up, put a fake smile on my face, and pretend to be happy with it all. Sure, I was terrified of dying, but at least I didn't need no holy text to tell me that killing was wrong. That is obvious. Was there anybody who really needed a reminder of that?

To cope with the fact that this was going to be the only life that I would ever get to live, I got fixated with the idea that pleasure was a real way to really experience life. Flirting, drinking, inhaling, ingesting, and snorting my way through countless sleepless nights and increasingly disgusting hangovers.

After a while, once I got bored of this, a friend introduced me to yoga, and I was like, Huh, this is easy. I can do it. I got it. So I started practicing every now and then, and man, I started feeling so good about myself. So blessed and in touch with a universe that surrounded me while smoking the second joint of the day. Sometimes the third one, if it was a lucky day—just before midday so my girlfriend wouldn't see me high when she came back home from work. Man, how I wish somebody had told me earlier that spirituality would feel so great. And so easy. All I had to do was sit there for a while and relax. Then try not to fart too loud during downward dog. Why did I ever want to be an atheist in the first place? I even had a Buddha on my arm that I'm sure brought me this much closer to enlightenment. Until one night dancing with my girlfriend in one of her favorite bars.

To be honest, at that moment, I thought I was hypnotizing her with my sexy Latino movements, but I must have been doing something pretty wrong because instead, she grabbed my arm and asked, "What's wrong?" "What do you mean what's wrong? Nothing's wrong? I'm just dancing." But she just made a funny face. "What do you mean with the funny face? You're funny." But at the same time, inside my head, alarms were going off. Not just because she was giving me that witchy stare that women do every time they know something's up. But because right there, I knew that no matter how much I said I loved her, my words would be forever hollow if I didn't confess the secret I had been keeping from her. Still not believing what I was about to do, I turn around and look at her as I'm standing at the edge of a cliff with my foot ready to jump. "I slept with someone else," but the music was too loud, and she didn't hear. So she asked, "What?" "I said I slept with someone else."

Later that same night, sitting in the bed we shared listening to her sobbing, I kept searching inside me for something, anything that would help me figure it out, what the heck was wrong with me. I was supposed to have no need for a god that judged my actions, no need for an external law that condemned me to hell if I did wrong. I was supposed to be a good man for the simple fact that I knew what good looked like. And instead, here I was. Nothing but an asshole willing to trade yet another one of my values for a two-minute fuck. To say that I was ashamed says nothing about the repulsion I felt when thinking about who I had become because the whole time I knew, I knew what I had to do, but I always had a good excuse not to do so. Things were either too hard, too tasty, or too cheap for me not to indulge in them and, in the process of doing so, I churn myself into my own biggest lie.

Now I must say I was hopeful because, despite the fact that I was not proud of the things I had done, in knowing that I had stood up for something that at least for once I stood up for something that I believed to be holy, I could see a faint glimmer of the real being that couldn't wait to surface inside of me. Now, it wasn't easy. You see for a long time afterward, a terrible guilt and self-doubt kept creeping on me. I felt unsure that I would ever be able to trust myself again, but by keeping tiny promises, simple things that I knew, hopefully, that I wouldn't fail and be able to do every single day.

Slowly I regained my confidence, the confidence that I had lost. And thanks to this, I finally realized that I was not defined by the things that I had done in the past but by the actions that I was committing in the present moment. Along the way, I realized the importance of living in something bigger than my ego. You see, it's not easy to be truthful. It's not easy to be yourself. It takes an incredible amount of courage and an almost masochistic willingness to face your most painful fears.

I am hopeful, though. I mean, I'm happy actually because today I can say that my words are no longer hollow. Now, instead, thanks to everything I've done since that day, they're filled with love. And through that, I've regained my faith because now I am convinced that inside me lies everything I'll ever need to be my best self, the real self. If I'm only there being honest. Thank you.