Are you ready to take your courageous heart and desire to impact the world to the stage and tell your story?
YES! I am ready!
Description
Speaker
Transcript
Mima Irma Hutabarat tells the riveting story of how, as a young girl, giving food to a beggar instead of the usual bag of rice got her in trouble with her mother. As for the beggar, “I can still remember his eyes like disbelief and sparkling . . . I was just feeling like I felt him.” Even though Mima went on to have a successful career in the corporate world, from then on, she knew in her heart she was an activist. Attending an anti-corruption conference in South Africa, Mima meets and even dances with Nelson Mandela. “I realized that he's not only a big name, but he has a big heart.” 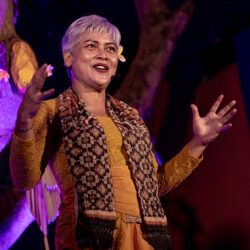 And in my surrounding neighborhood, there were still forests, there were still rivers, and there was still a lot of poor people. There was a beggar who would come from house to house, bringing ragged white sacks, and each house would give him a cup of rice. Not money, only a cup of rice, so maybe he would not be starving. Of course, he would come to our house too. And my mom would prepare a special plate, with a special glass, and special food for my father. That's how we respected our father—special food for him.

I saw the tukang minta-minta—the beggar—come and the cook would go with a cup of rice. But then I saw the food on the table, and I thought, Oh, he might be hungry. Why don't I just give it to him? So I put it in a big tin can. I put my father's food there with the rice, with the fish, with everything for him, and gave it to him. And I can still remember his eyes like disbelief and sparkling. That old man, now I still can imagine his face. So he ate there, but when my mom found out, she was confused and furious because there was no food for my father. There was no restaurant. There was no café. She had to cook and said, "You don't do that again because we can give a cup of rice, but not your father's food."

I had my own lunch. What did I do with that? I gave it to him. And my mom said, "Maybe you don't understand Bahasa Indonesia. Which part is it that you don't understand? Do not give food because we give rice." And I was not sad. I was not angry. I was just feeling like I felt him, and my mom said, "No lunch. It's okay. You can give yours, but no lunch for you." I was not crying. I just walked to the neighbor and, you know, went into the kitchen talking. I had a very, very, a very loving neighbor, Basri. And they fed me. "Have you had your lunch? Come, come, come eat with us." So I had lunch at my neighbor's, and the big sister was a dancing teacher. So after lunch, I got a free lesson in dancing, and I danced. I danced and danced. My mom didn't know about it because she's like, "Oh, she finished her lunch." And that I had then gone to my neighbor.

And I still remember that feeling. And I'm happy that I could keep that feeling because then I became an activist. I was the chairwoman of the Legal Aid Foundation for Women and Children. And I also established Kapika, the independent commission against corruption—like the Indonesia Corruption Watch. With the feeling of that little girl, I knew that in my heart, I'm an activist and I had a long career. I was in investment banking. I was in the biggest advertising agency, J. Walter Thompson. I was in first class on planes, in hotels and everything. But I knew deep in my heart I've never stopped wanting to become an activist. That was my story in 1969.

And 1999. This is what I want to share with you. I went to Durban, South Africa, for the OECD conference on anti-corruption, so delegates from all over the world were there. I went with Professor Emil Salim, the former Minister of Environment. He became an activist after retirement. And I helped him to prepare the presentation. 1999. We did the presentation with slides so he could do it with his handwriting. And I was the one who suggested him to use slides with his handwriting. And he would talk in the plenary session. The plenary session was the biggest session. There were like 2,500 delegates there. There was James Wolfensohn, at that time the director of IMF. And the president of Transparency International. There was also the CEO of OECD and, of course, Nelson Mandela because it was in South Africa.

And Prof. Emil said, "There will be the plenary session. And after that, there will be questions and answers." I said, "Oh, I really wanna ask a question. How do I do that?" "Sit next to me," he said. There would be hundreds of hands. So after the plenary session finished, there would be questions and answers. And "Okay. Who wants to ask a question?" I raised my hand like hundreds of hands also, but Prof. Emil was right. And somebody said, "That girl." "Me from Indonesia?" I was so happy but also shocked. Oh, I better have a good question because maybe they chose me because first I'm a woman. Second I'm from Asia, from Indonesia—very famous at that time because we were the champions of corruption. That was 1999, just one year after Suharto stepped down. I think, Well, this is my chance. So I raised my hand, and they asked, "Okay, who do you want to question?" I said, of course, "Nelson Mandela." I said, "Mr. Mandela, would you share with us what were the biggest obstacles when you became president? What do you think was the most difficult thing?" Because we know he won awards for housing when he put all the people from the slums into housing—he won so many awards.

He then said, "That's a good question, Miss Irma Hutabarat." I was so happy. My name was mentioned! And he answered, "I have built schools. I have built housing. I have built infrastructure, but the most difficult thing, and the most important thing to me, is to heal my people. They have a lot of wounds, anger, insults, disappointment, you name it, from apartheid. And it's not easy to overcome that. I can't build this nation if they are not healed because they're not ready. So that's what I did. I sent a psychiatrist, a psychologist, public figures, and the people in each and every village would pay special attention to the wounded person that was allowed at that time." And I realized that he's not only a big name, but he has a big heart.

And the evening after that, there was the closing party, the farewell party. And everybody was there. I was there too. And somebody came to me and said, "Miss Irma, what about you? You were the one who asked the question. Would you like to dance with Nelson Mandela?" "Do you want me to answer? Is the Pope a Catholic? Of course I want to dance with Nelson Mandela," and he escorted me and I was dancing. I was dancing. If you asked me how I felt, I saw a very compassionate person—peaceful and very gentle. And I was dancing with him. I felt honored.

And I remembered my childhood. I remembered my mom before she died. She told me, "Now I understand you. I shouldn't have punished you because you were a kid. You've got a golden heart. We had lots of food on the table. Why would I punish you?" And that was the nicest thing that I heard from my mom. "And yet you learned how to dance?" She didn't know about it. And I told her that the punishment was like a blessing in disguise. So when I was dancing with Nelson Mandela, it felt like I was dancing with life. And this is the message that I want to give to you all—keep dancing, keep dancing with life.