The More Sorrow One Sees, the More Perfect One Becomes

Are you ready to take your courageous heart and desire to impact the world to the stage and tell your story?
YES! I am ready!
Description
Speaker
Transcript
Sara Agah Franti explains the terrifying circumstances under which her parents moved to Canada. She recalls racist comments made to her and her family just because they were different. “This feeling of sadness moves up and wraps me up.” Facing up to her bully at school, Sara wanted other children that were different to know “That their differences have value.” Sara shares how people she met inspired her, and “I had to reidentify the way I saw myself moving through this world.” The power of that led to her retreating for a while, but in re-reading a book, Sara started to realize her true authentic self. 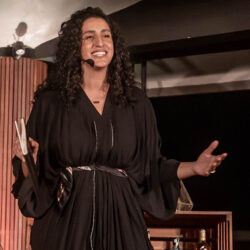 A child of Baha’i refugees from Iran, Sara Agah Franti was raised with values of service and acceptance. But from childhood to motherhood, she would have to move through some painful experiences and make hard choices to make these values her own.

She co-founded Do It for The Love with her musician husband, Michael Franti—using the power of music to inspire hope in those facing life-threatening illnesses. She also runs a wellness hotel with Michael hosting music and yoga retreats.

Sara supports women to discover their deepest values so they can live a fulfilling and impactful life.

I'm twelve years old. I'm on the school bus I ride to and from school every day—that big yellow bus with the double-seater seats with the little kids in the front and the big kids in the back. Well, today I'm in the middle of the bus. I'm talking to all my friends, having our usual banter bouncing up and down. And I hear a voice. Tanner Johnson. Ugh, your standard school bully. Well, Tanner yells from the back of the bus as loud as he possibly can for everyone on the bus to hear right at me, "You are a brown cow." Brown cow—attacking everything that's different about me.

I'm six years old. We're at the Calgary Stampede, this big citywide event. We're in this crowded room, shoulder to shoulder. And with my family, we shuffle onto this escalator, and this woman turns around and tells my parents to go back where they came from. And as slowly as the escalator is moving down to the floor below, this feeling of sadness moves up and wraps me up. And this knot that had never existed before has now formed in my stomach. I don't remember what my dad said in that moment, but I know that he stood up for us. And I also remember that my heart broke, and I never wanted to feel this shame or sadness again. And so, this belief that I had to fit in to survive was solidified.

You see, my parents came to Canada in 1982 as refugees from their home country of Iran. At the time the newly formed government was persecuting my family and thousands of other families who were members of the Baha'i faith. The newly formed government was giving them two choices, recant your faith or face prison, and oftentimes even death. And so my parents chose to give up everything that was familiar to them, including their own family, and leave to find a life that was better for their children. My parents sacrificed everything to seek out opportunity, security, and acceptance. And the sacrifice that they made has informed every single decision that I have made in my life.

I'm back on the bus. And I remember the courage that my dad had in that moment. I take a deep breath like I'm breathing in the courage that my parents had when they were forced to leave their home and leave everything that was familiar to find a new life. And I look Tanner right in the eyes, and I yell as loud as I can, "At least brown cows make chocolate milk."

It was that moment that my warrior spirit was sparked because I knew that what I had to say in that moment was bigger than just standing up for me. It was about standing up for every kid on that bus that was different—to tell them that their differences have value. And to tell me that I don't have to be ashamed. The impact that I had on that bus and everyone around me was unforgettable. And I knew it was because I showed up as my authentic self. Being a member of the Baha'i community, I grew up with this tight-knit community. It was awesome, but I also had formed some really strong beliefs. And I had drawn some really deep lines in the sand. If you were this, you were good. And if you were that you were bad.

And when I was twenty-one, I finally moved out on my own to go to university. But that meant that I had to leave that community that I was so familiar with and comfortable with. Now I'm in this new city, and I have to make new friends. And all of a sudden, these people aren't fitting into the boxes that I had once created. I'm meeting people who are gay, straight, bisexual, non-drinkers, drinkers, weed smokers, weed-growers, weed trimmers, doctors, yogis, teachers, artists, cultural creators, and some who are all of the above. And unexpectedly, they're all inspiring me to be my best self which is incredible and eye-opening and heart-opening. And also really scary because that meant that I had to reidentify the way I saw myself moving through this world with this new understanding and this new empathetic heart. The world went from being easily black and white to completely gray. And I was scared, and I felt like I was being a traitor, particularly to my parents and this community that loved me so deeply because they also brought so many incredible things into my life.

And so I retreated. I needed time to understand and figure it all out. Well, what did that look like? I stopped meditating. I stopped praying. I stopped reflecting. I was drowning in sadness. The guilt was overwhelming.

In reading these words, I realize that the pain of this past year wasn't for nothing. I am the earth being plowed. I am the gold and the fire becoming more and more pure. I am the steel being sharpened. I started reading these words every morning, and every night I would breathe these words so that every cell in my body could feel these words because they reminded me that you don't have to be afraid. You don't have to be afraid of pain or confusion. It wasn't all wrong. I was coming out stronger. I was forging my new own path. I wasn't being a traitor. In fact, I was just being really honest with myself.

And the biggest thing that I realize is you don't have to forget your past to grow. In fact, it's the foundation that you are growing upon. The values that I grew up with are still within me and play a role in my life because nothing in life is a mistake. Looking back, the twelve-year-old me could have been quiet on the bus, and I didn't have to follow my heart. And I would've still been of service today, but I know it wouldn't have been with the same impact. And most importantly, the feeling of righteousness that I have in my bones. And it feels so good to know that this is my truth. The path of creative service is not dissimilar from the one named in the Baha'i meditation. It's not always an easy one, but the more I am willing to plow, the more I am willing to have my branches cut and to face the grind, the more powerful and impactful it becomes. I need me. Not the condition me. Not the one trying to impress, not the one feeling unworthy. I just need me. I need the authentic me to shine through. And that's why I'm here today to share my authentic truth with you.