The Rules are Made Up

Are you ready to take your courageous heart and desire to impact the world to the stage and tell your story?
YES! I am ready!
Description
Speaker
Transcript
Sandra van der Lee discusses how the spoken word, as well as experiences in her childhood, influenced her. Sandra tells how on the day of her father’s passing, she spent the evening with friends talking about anything but her father’s death. In her second week at university, Sandra describes a lecturer. “For the very first time in my life, I'm starting to think that maybe I'm not the smartest person in the room after all.” Working in hospitality, “I decide I never want to work for someone who's dumber than me ever again.” And Sandra realizes she had something in common with her father—“A hunger to decide what we do with our time.” 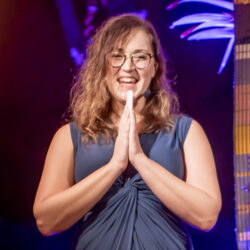 There's a knock on the window. Joshua, the tallest boy in my class, comes through it. First, his long blond hair followed by a Metallica T-shirt, ripped jeans, and combat boots. He's late. And if he comes in through the main entrance, he'll get detention. The thing is, he didn't oversleep. He works an early newspaper round to financially support his family. We all know it. And it's actually the teacher that opened the window for him because what he and I understand is that the rules are made up. Some other teachers—they don't get this.

And I often verbally disagree with how they run things. You know, I'm not the quiet type. "Sandra, another zero." My German teacher would crinkle her nose when giving me back a vocabulary test. You see, I inherited my mother's wicked way with words and my father's wicked brain, but somehow their desire for education escaped me entirely. I was bored.

I'm eight years old—in more pain than I've ever been in. My mother wasn't home. She was working late at a convention. My dad is lying on a couch with me. He's holding my head. He's crying. "Please give me your pain. Please give me your pain." The thing is, I've got an ear infection, but he's too drunk to get up and get me ear drops.

I'm seventeen and in the final year of high school. Even though it is a school night, all my closest friends are sitting on this huge circular couch that my mother and I picked out together. We talk about what teacher made a stupid joke and who's crushing on who. No one really wants to talk about what happened earlier that day.

Earlier that day, I'm sitting in the second to last row in a nondescript classroom. You know, the row where the average troublemaker usually sits. The door opens, and the head of my department walks in. He looks straight at me, and I laugh a little guiltily because what happened was I skipped some classes the week before. He and I, we had this fantastic system. I would write a note pretending it was my mom's saying that I was sick. He would accept my note and pretend to believe me. He asked me to follow him into the hallway. And I think Uh oh, I've been to the dentist one too many times this year. Instead, in the hallway, my mother is there. "Your father passed away earlier this morning," she says.

I'm six years old, and I'm learning to write. And it turns out I'm ambidextrous. I sit on my dad's knee in his tiny home office. It still smells like the cigar he just finished smoking. "Daddy," I say to him. "I can learn to write with my right hand or my left. Just like you." He swallows and looks at me solemnly. "When I was in the orphanage, they would hit my left hand with a ruler every single day because I couldn't write with the right hand."

After high school, I enroll in the Bachelor of Economics. Now I really wanted to study something way more unemployable and interesting. But after my parents got divorced, the once or twice my dad and I spoke, we could only talk about school. And I remember telling him, "Dad, I'm doing actually pretty well in economics." And he joked how I would end up as a fancy business lady in an expensive SUV instead of a muddy 4x4 that he would prefer. So when my mother suggested maybe I study something useful first, that's exactly what I did.

It's the first Monday of university. I am ready for a fresh start. A place where no one knows who I am and where I can be anyone other than the girl whose dad just died. However, after three days of math classes, I am utterly befuddled. "Why would anyone want to learn math that has both the regular alphabet and the Greek alphabet mixed in?" We're in the kitchen. My mom's on one side of the dining table, and I'm on the other. By then, I am so angry. Tears are coming down my face, and I'm screaming. "I don't get it. This was supposed to be fun. It's just math." She takes a deep breath and sniffs back at me. "So quit. I don't want you living in my house if you're gonna be like this."

It's the second Monday of university. I'm in a small room with only forty students. A small lady is in the front. She's got this ramrod straight spine and short dark hair. There's gray in it and pain in her eyes. She's lecturing under the early beginnings of Judaism. And she carries the history of her people with her every single day. For the very first time in my life, I'm starting to think that maybe I'm not the smartest person in the room after all.

You know, there's this thing that students always need more of, and I'm sure you can guess it's money. So what happens is I end up working in the Amsterdam airport and, if you've worked in hospitality, you know about this, we don't have clients or customers. No, we have guests. I'm not sure what kind of guests would leave their croissant crumbs all over your house and yell at you when their flight is delayed. It's more like feeding an army of angry two-year-olds.

And in this job, my female managers—they don't like me much. I don't know. Young, pretty, smart-mouthed—not everyone's cup of tea. Clang! I'm in the back slicing tomatoes. The cute dishwasher tells me about his weekend, and I'm relieved to be away from our guests. There's three managers huddled behind a computer. My favorite male manager speaks. "We need to order Mountain Dew." The nicest female manager that stole three bar shifts from me the week before after we had a disagreement speaks next. "Um, Mountain Dew. Do you spell that with M O U or M A U?" That's when I decide I never want to work for someone who's dumber than me ever again.

It's 23rd August 2017. By then, I've finished seven years of university. I'm officially an engineer. I've helped neuroscientists figure out where God lives in the brain. I've done research about tourism in India. I've presented on people going on pilgrimages to Elvis Presley's house. Surprisingly, I can't find a job. So what happens is that I enroll as an entrepreneur at the Chamber of Commerce.

For the first time in my life, I feel like my dad and I have something in common after all. You see, when he was sober, he was working, building, selling, inventing, tinkering. And actually, by the time I was nine, our family home was paid off. And it's this thing where we share maybe a hunger to decide what we do with our time. A hunger that did not have to listen to what anyone else wants for us and a desire to get paid for the stuff our brain comes out with. I'm utterly clueless as to what I'm doing. And although my dad would've known nothing about online marketing, for the first time in my life, I miss him. And I wanna tell him, "Dad, even though I didn't end up writing with my left hand after that little speech of yours, maybe we're the same—you and I.

It's 27th February 2021. And in the past three and a half years, I've signed clients, and I've lost clients. I've left friends behind, and I found a new family here. I've messed up more than I can count, but I've also done really well for myself. Most days, I still have no clue what I'm doing, but I do know this. No one else chose my life for me.