How a Nuclear Accident Saved My Life

Are you ready to take your courageous heart and desire to impact the world to the stage and tell your story?
YES! I am ready!
Description
Speaker
Transcript
In this talk, Carolyn Tyler speaks frankly about her depression and even a suicide attempt. Diagnosed with SAD and medicating for forty years, she finally discovered she was affected by a local rocket testing plant and nuclear plant, which had three partial meltdowns. “They just opened the doors and let it all out over the population.” She was told, “The good news is we can get those toxins out of you. And you'll likely be cured of your depression.” She was warned it would take years, but Carolyn used her own methods to sweat the toxins out, and seven months later, a test showed she was clear of them, prompting her to open a detox center in Bali. 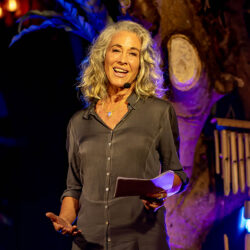 Since 1993 jewelry designer Carolyn Tyler has been producing handmade one-of-a-kind gold jewelry with her team of master craftsmen in Bali.

Carolyn is passionate about her role as an Anti-Nuclear/Toxic Waste Dumping Activist and Public Speaker and “Excited about my future plans to help bring the military-industrial complex to full disclosure and remediation of secret toxic sites near unaware populations across America.”

It's March 2014, and I'm standing in the middle of Sanur Bypass. It's Bali's busiest road. And I'm praying that a truck runs me down. I've lost seven members of my family, and the recent deaths of my niece and my sister have devastated me. I've been suicidal for six months, unable to eat or sleep. And I just snapped.

But nobody would guess that to look at my life now. I've had a really charmed life. And I think most people just assume that I've breezed through it, sort of leaving a trail of golden bubbles in my wake. Some of you know I'm a jeweler, but the truth is, and I'm taking a risk to say this, I've struggled with the label of mental illness all my life. And I say label for a very important reason, which you will find out. Society has stigmatized and shamed us by saying we're crazy. We're bipolar. You've heard it all. It's still a really scary thing, as you can see, to say this just in front of this small group. At twenty, I was diagnosed with seasonal affective disorder. That spells SAD, and that must be some kind of cruel joke, right?

About half of every year, I looked good on the outside, but I was dying on the inside. On a depressive scale of 1 to 10, I was a suicidal 10, but only in the fall and the winter. In the spring and summer, I was carefree, happy-go-lucky, energetic, very creative, very productive. A psychiatrist blamed repressed trauma and genetics because all my family was also depressed. When it came on every fall, it felt like someone was injecting me with a feel-bad drug. And I told the psychiatrist that, but their answer was always medicine, prescribe. They were incentivized to do that. So they dosed me with pharmaceuticals to dull the pain rather than investigate possible causes and perhaps even find a cure. I'm just gonna take a moment and ask how many of you in this room have been affected by somebody's mental illness, yours or anybody you know, depression, anything? That's all but one person.

I'm just gonna give you a few statistics. Here's a reality check. Globally depression is epidemic. In January 2020, the WHO claimed that 17 percent of Americans are clinically depressed. And that was before the lockdown. Imagine what it is now. Economic losses are $210 billion annually. That's more than Jeff Bezos is worth. While the medical mafia reaps the profits, which have doubled from 14 billion last year - let this sink in - to 28 billion in the first eight months of 2020. Yet, there's no discussion about the cause. And there's no talk of any cure. Why do they say it's incurable? Sorry. I digressed. Back to my suicide attempt. Obviously, I was not killed. The cars went around me as the Balinese do - very good drivers. Nobody even honked - seriously. I stood there for five minutes, waiting. Didn't happen, thank God. That winter of 2014 was a total blur.

I can't even tell you how I survived it, but I am so glad I did. That April, like clockwork, my depression lifted. And I got back on social media and found messages from friends. Some who were in my childhood neighborhood saying how sorry they were that I'd lost my family. And that a large part of their family had died too. And also, almost all the neighbors on the street had had cancer. And I started thinking, "That's weird." It was really rural and beautiful agricultural land in the San Fernando Valley, outside of Los Angeles in the fifties and sixties. What happened? Was there a pesticide dump or something? So I just went on Google, and I typed in San Fernando Valley cancer clusters. And up came dozens of stories that shocked me to my core. Six miles from my family home, there was America's first nuclear plant, which had been kept secret from the public. From 1959 to 1969, it had three partial meltdowns. The first one was the worst. It totaled more radiation than Three Mile Island by 450 times. They didn't have any containment facility. They just opened the doors and let it all out over the population.

Sorry. It's really emotional for me. So I just sat there cold and shaking. I now understood the mystery deaths of my parents, my sister, her daughter, my grandparents, and why my only remaining family member had had cancer, including thyroid cancer, when she was twelve, three times. The next day I went down to a holistic doctor, and I got a provoked heavy metal test. We had to use a binding agent called a chelator to pull out the toxins to get an accurate reading. Our bodies are so smart. They encapsulate toxins that we can't eliminate in specialized fat cells. And they store them there to protect our vital organs. My tests showed cesium, strontium, plutonium, many other radioactive nuclides, and glyphosate, on and on, you know the list - mercury, lead. But the mystery thing was my manganese levels were completely off the chart. There's a red column, which indicates really bad levels - danger danger. My manganese levels were in the margin of the paper. They were literally outside of that. The doctor said, "Well, this only comes from mining or welding." I said, "I assure you I've done neither." He said, "Well, there's no other cause so . . . it doesn't come from nuclear accidents." We got online. I said, "There has to be another cause." We scoured the internet. Didn't come up with anything but mining and welding.

The five things that happen when you're manganese poisoned are Parkinson's, Alzheimer's, seizure disorder, autoimmune disease, and guess what? Chronic depression. So there was my poisoning that I'd always felt I'd had, and I'd told the psychiatrist, "I feel like I've been poisoned." And I was, but now the mystery was how. For months I didn't give up. I scoured the internet. I asked every doctor, every medical professional. I followed rabbit holes of scientific journals. I couldn't find an answer. And then, in 2016, a fateful trip to Bangkok where I met an American man who was also a victim of conspiracy. His name was Brian Dardzinski, and he owned a little clinic there next to Bumrungrad Hospital.

He was a vaccine researcher, and he'd been drummed out of America. But that's another story. He said to me, "I do know one other source of manganese poisoning. Did you live in Arizona or New Mexico?" I said, "No. Why?" He said, "Because rocket testing produces manganese in the fuel particulate that people can breathe." I got chills again. I said, "I lived in the San Fernando Valley where there was Rocketdyne, which was right next to the secret nuclear plant." And he said, "That's it. How long did you live there?" I said, "Twenty years. And I remember as a kid, every night the sky looked like opals." He said, "Those colors represented all the toxins that were floating down on you."

He said, "The good news is we can get those toxins out of you. And you'll likely be cured of your depression. But the bad news is it'll take two to five years to do that." So off I went back to Bali with my detox kit, and I own a far-infrared sauna, which is the single most important detox item a person can have. I highly recommend it. I knew that sweating was a way to eliminate toxins. So I added two sessions a day of infrared sauna. And I also added twenty minutes on my rebounder jumping up and down for twenty minutes, which works your lymphatic system and cleanses your tissues that way. So guess what? In seven months, I went back to that clinic. I had a friend who was going through some cancer therapy, and I said, "Brian, I feel great. I think I'm done." And he said, "No, no, come back in fifteen months. You're not done yet. No way." "Please take my test." He wouldn't. So I went to my friend's clinic. They took my test. All clean. Everything, clean, clean, clean. I went back to Brian. He said, "How'd you do that?"

I told him how I did it. So he said, "Congratulations. Now you can get yourself off your meds." In one month, I weaned myself off medication I'd been taking for forty years. This month is my five year ‘sanity-versary.’ No meds, no depression, five years. Thank you. So I'd like to inspire all of you into action today to become an advocate for your own health and your own sovereignty. Even if you feel perfectly fine, you can enhance the quality of your life, your energy levels, your stamina. I'm sixty-four now. I feel like I'm twenty-four. I have never felt better in my life. Especially the strength of your immune system. It's super important right now with COVID-19 to strengthen your immune system. And that can happen when you rid yourself of the toxins that you acquire from life and hidden poisons that we can't even see. So my message is twofold. Listen to your intuition and never ever, ever give up looking for the truth. I'm actually grateful for my . . .oh, God, I just got chills all over. I'm actually grateful for my experience with the nuclear accident, which led to my new purpose in life. I'm currently creating awareness with activism and satire - humorous songs, but I'm also building a detox and wellness center in Ubud called Lumina. I want to help other people achieve optimum health. Thank you so much for listening.