How I Failed Comedy

Are you ready to take your courageous heart and desire to impact the world to the stage and tell your story?
YES! I am ready!
Description
Speaker
Transcript
Giving a stand-up performance, Alicia Dattner makes us laugh with her jokes and tales of love. She regales us with her stories of sold out shows and later Broadway. Alicia humorously describes the beginning of a relationship while she was on a retreat but questions if she has permission for it. Alicia tells how, along with all the success, there were difficulties in her comedy career. She admits to wanting more success. “And I just start to wonder, like, Maybe I'm not good enough.” After a show in Bali, she’s told to talk to her goddess. Tuning in to her goddess helped her “To enjoy the shit out of it right here now." 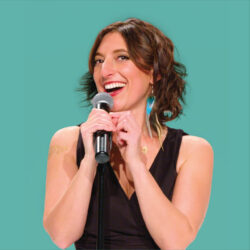 As well as many clubs in the States Alicia performed in Bombay, Chennai, London, Honolulu, and Bali.

She’s won tons of awards for her comedy, including Best of the Fringe (twice) at San Francisco Fringe Fest.

Alicia leads one-on-one spiritually guided coaching and workshops around the world. “My craft is informed by cultural studies, ecology, transpersonal relating, somatics, travel, spiritual practice, and a little too much NPR.”

So I'm thinking about getting a nose job. I just wanna look more Jewish. I'm gonna make it bigger. I had a breakup, and my grandma called. I was crying. She was like, "Honey, it's time we get you a nose job. "What?" "Find you a husband." "What?" "I mean, it's not very attractive to wake up next to a giant schnoz like that, Alicia? Hmmm?" "Grandma, ouch. I mean, if a husband is what we're going for, wouldn't a boob job be more effective? Or a blow job or a day job—that'd be less invasive." So it's 2015. And I'm about to perform these opening lines for my brand new standup comedy show, The Oy of Sex, at the Hollywood French festival. And something weird is happening. They're delaying the show because it's so sold out. They're actually lining the stage with audience members. As I get on, they cue the music. I do my show. "Hi. So I'm thinking about getting a nose job . . ." And it goes amazing. I kill it. People leave having grown and laughed and cried. And I have an amazing time afterward. This woman pushes through the crowd. She's got cat-eye glasses, and she says, "Phenomenal show, Alicia. I'm a producer, and I'm taking you off Broadway."

I go home. I get into my ritual postshow bath, and I am riding high. I'm thinking, you know, sure. I've performed around the world. Sure. I've won a bunch of awards, but now I think it's finally happening. Like I think, this is it.

And I flash back to a few months before. I'm on the operating table. I am having my eggs harvested and frozen—pushing snooze on my biological clock. Just hoping that my career takes off before I have a family. And this anaesthesiologist says, "Okay, Alicia." He hooks me up with morphine, and he says, "Can you count back from ten for me?" "Okay. Ten, nine, eight, you're cute. . ."

That's when he leans in. He caresses my face. He kisses me, and Korea just starts to rumble up my spine as his hands sweep through the water toward my yoni. And I just give in to the absolute bliss of Esalen Institute. Thank you. This is what I came here for. For the next week, Colin and I are just being totally inappropriate in the tubs every night. One night at dinner, we're eating spaghetti, and he just in like the best possible move of comedy and romance in combination, he takes one long piece of spaghetti. He places one end in his mouth and one end in mine, and just bit by bit, we go full lady and the tramp, and my heart is a flutter. I can't believe this is happening. Is this really happening? Like, can I actually have this?

I dunno if I can have this. I freeze. And that old fear of loss just starts to haunt me. And I just breathe through the fear because it's so good. I don't wanna miss this. And I just say, "Yes, I can have this. Yes, I can." And Colin, oh my God, he's amazing. He's a massage therapist in Argentina. And he says that he actually just got a job offer in California. Like he might move here. So two days later, he flies back to Buenos Aires. I fly to New York for my show, and we're sending love notes across the globe.
And then our calls start to taper off. And I realize I was just a post-divorce fling. And I have by this point in my life done mountains of therapy, meditation, healing my inner child work. I have traveled solo throughout India. I have tasted moments of nondual awakening but, no matter what I try, nothing works, and it just hurts. And I'm single again.

Flash forward to New York. It's opening night. We have the premier. They cue the music. I come out. I kill it. People laugh and cry and grow. All of our hard work has paid off, and it feels really good. Afterward, I take the train uptown to 72nd street. I'm missing Colin. That's mainly what I'm thinking about. I get in the postshow ritual tub.

And I check my belly in the mirror, and I'm carrying into the tub like literally a bucket of chocolate malt balls with me. I flip on the music and, of course, it's this song “I'm so tired of being alone. I'm so tired of on my own. Won't you help me?” And I just start bawling. And then I spiral further into the rumination, into the misery around my career. And I think, you know, people get really excited when they hear I'm a comedian. They go, "Oh my God, you know what you should do? You should do a show about . . . mmm . . . spirituality." "Oh, you know, you should talk about white fragility." "Oh, you know, you should talk about the pandemic, you know, tell the truth, you know, the truth." Whatever that is! "The truth."

And whenever people say, "Oh my God, you know what'd be so funny . . ." or they wanna pay me to write a script or a show, like on the outside I'm like, "Oh yeah, that would be totally fun. That's awesome." And on the inside, I just cringe. And I’m just like, oh no, I can't. I can't. I just can't be funny on command. Can't do it. I don't know why, but it's really frustrating to watch all the people I started with get on TV and just not have the kind of conventional success that I dreamt of as a kid.

And after eighteen shows in New York, nothing comes of it. No new booker, no new manager, no agent, no Netflix special. And I just start to wonder, like, Maybe I'm not good enough. And some part of me just gives up, which in a way is really freeing. A year later, I'm doing the show for some friends in Bali, and we have a lot of fun, and I'm just doing it for fun. That night I go home alone. Again, I get into the postshow bath. I'm missing whoever I'm missing when there's a knock at the door.

Two people who were at the show saw me leave alone. I don't really know them, but they bust the door open. They sweep me onto the couch, and they hold me in a tight embrace for the next hour. Robin and Ben are sharing love, and appreciations, and care. And their wisdom just breaks my big tender heart open. And Robin looks me straight in the eye. And she says, "Alicia, you know, you're not just a comedian, right? You're also a priestess. You're like a badass comedy tantrika. I see the goddess moving through you and awakening that entire audience. I see it. You know, after the goddess performs her magic, she needs to return to the temple for replenishment." "You know, I'd really like to be replenished with some money and success." "Alicia, just go talk to the goddess."

So after they leave, I climb back in the tub. I light the requisite candles and incense. I play the requisite flute music, and I speak to the invisible comedy goddess in the air. And I plead with her. "Goddess. I have not been honoring who I am, what I provide, and what is flowing through me. Please show me your will for me."
Just then the candles flicker. The music stops. And the goddess of comedy speaks to me . . .like in my head. A . . . LI . . .CIA! Ha ha. Just kidding. I'm the god of the comedy. Come on! "Write this down, so you can speak it. Alicia, other comedians may use me as a means to an end. But for you, that's a betrayal cos you're here to wake up. That's what you get to do. You don't get to control how your career goes. You just get to enjoy the ride." I don't wanna be forced. I wanna be invited, discovered, savored, known.

"I wanna trick you into seeing every painful truth, feeling every sensation and emotion, and then transcending it all. I want all of you from the broken down, cracked out miserable parts to the dancing night rainbow parts. Baby, I wanna make you rich in spirit, but only, only after I have tied you up and teased you and knocked you down on your knees, so you are begging me to chop off your head to slay every last thought of disconnection, untruth, and disease till you are worshiping me with uncontrollable orgasmic laughter. So fuck your little Instagram following, fuck your childish attempts to impress and seduce with your cleverness because what's on offer is so much bigger.

And guess what? You don't even need to be healed to be funny. You just need to welcome everything as it is right here now cos this is it. And welcome all of these people—these miraculous precious beings—into your temple. Nothing to fix, nothing to prove, nothing to become. This is it. And I hope you enjoy the shit out of it right here now."