Are you ready to take your courageous heart and desire to impact the world to the stage and tell your story?
YES! I am ready!
Description
Speaker
Transcript
The video features the inspiring story of Dedy Tien, a successful businessman and mentor who overcame a difficult start in life. When Dedy was 14 years old, he and his family were accused of being political dissidents and were chased by a truck in Bali, Indonesia. The driver eventually stopped and offered to take them to the city. Dedy's brother later left for Norway, leaving Dedy behind in Bali. It was there that Dedy met a man who offered to teach him how to have a body like Arnold Schwarzenegger. This encounter led Dedy to work as a trainer in Bali and later in Australia, where he was mentored by Chris Jackson. Dedy eventually moved back to the US and continued his work as a trainer while also mentoring others who wanted to learn English. In addition to his career, Dedy has written multiple books and is dedicated to helping Balinese children learn English and reach their full potential. His life mission is to empower individuals to achieve their full potential and he believes that life can be simple if you want it to be. 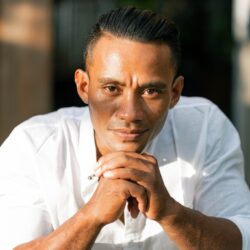 Dedy Tien is an entrepreneur who is passionate about helping aspiring business owners gain clarity and confidence in their ventures. As the founder of The Inner Circle, he offers guidance and support to help his clients achieve their goals and build successful businesses. Tien understands that it takes more than just a great idea to be successful, and he is dedicated to empowering others to pursue their dreams and succeed.