The Voice of the Voiceless

Are you ready to take your courageous heart and desire to impact the world to the stage and tell your story?
YES! I am ready!
Description
Speaker
Transcript
Georges Bossous Jr. shares his experiences working with sexually abused children. In this deeply moving talk, Georges recollects conversations he had with the children and some of them later when they were adults. "Tell me what happened." Silence. Silence for three months. Changing strategy, Georges brought her from his office to a child-friendly room. “. . . I know that many people don't believe you, even your own mother, but I want you to know that I believe you . . .” His work took him from the US back to his home country, Haiti. “After ten years of being sexually abused, for the first time, they'll talk to a professional who validated their feelings.” 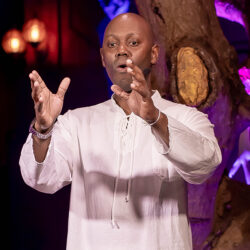 Georges is a Ph.D. Candidate in Public Health. He is a graduate of Barry University with a Master’s of Science degree in Psychology. He went through a 3-year-specialization (post graduate) in “Infant Mental Health” at the “Institute for Child and Family Health, Inc., formerly known as the “Children Psychiatric Center.” For more than 10 years, Georges has been working as a Psychotherapist/ Clinician. As a Developmental Specialist and Trainer, he provides psychological intervention for children from 0-5 years old as well as training for teachers and parents. As a speaker and chil advocate, he often holds presentations and trainings on cultural awareness, youth development, and family dynamic in different regions in the United States. Georges is the Founder and CEO of Word and Action.

In a modest office with no air conditioning, I sat behind the desk, and there he was walking into the room. He made no eye contact as I ushered him to a seat, but I noticed something on the other side of the desk, something familiar. It was pain, but with a mix of shame. "My name is Georges. I'm here to help and to talk about what happened." Like a punch in the gut. He couldn't breathe, and he grimaced out of an excruciating pain. He turned, and no words could come out. I took a deep breath just to give him time to recollect.

Well, he was twenty-five years old, and he had been sexually abused since he was seven years old for a period of ten years by a male missionary who was supposed to be his savior. He was not alone. There were another hundred children, male victims, who were hurt by the same man.

You see, their story changed me, and it all began in Miami, Florida, where I worked for a great company as a psychotherapist. I worked in my downtown office in Miami with air conditioning, a beautiful desk. And I walked down the hall to meet her for the first time. She was fourteen years old, a beautiful young girl. Best practice recommends that I introduce myself. And this same uncomfortable question resurfaced. "Tell me what happened." But this time, there was a glacial silence in the room. I took time and asked the same question again, but no words would come out.

And that continued for three months until I decided to change the strategies and apply some of the techniques that I'd learned in my multiple trainings. I left the room. I took her to a more child-friendly environment. And at that time, I did not sit in front of her behind a desk. I sat next to her. I faced the wall, and I started to talk. "You don't need to say anything today. You don't need to speak at all. I just want you to know that I understand it's not your fault. You did not do anything wrong. I know that many people don't believe you, even your own mother, but I want you to know that I believe you. You are a brave and strong young girl, and I respect your strength."

While I was talking, I glanced at her from the corner of my eyes, and I noticed a tear running down her cheek. And she turned and said, "Can you help me?" In turn, I said, "Yes, if you let me." That was one of my most joyful moments as a professional. After this great breakthrough, intervention, I ran down the hall, and I started screaming. "She speaks, she speaks, she speaks" like I was crazy.

And at that moment, I knew her life had changed for the better, but I had no idea that mine was going to change forever. Well, she was not alone. My journey continued as they referred more and more children who had been sexually abused to me. Many of them have been hurt by people they've trusted. People they knew—a father, an uncle, a cousin, clergy, a friend of the family, et cetera. But there's one who stood alone. She was about to celebrate her fifteenth birthday. As she worked in the therapeutic room, I noticed that she might have something unusual to share with me today.

But the truth is I had something that I wanted to share with her, but before she started to talk. And I said, "I need to share something with you. See, today is one of our last sessions because I have to leave this agency. She looked at me. She was like, "Is that because of a Word and Action thing?” (Word and Action is the name of my organization). And I said, "Yes," perplexed. I said, "How do you know about that?" She said, "Well, I went on the internet, and I searched you. And I saw your picture and what you are doing for children in the community. When I grow up, I want to be just like you."

"Really? You want to study psychology and become a psychotherapist just like me?"

"Yes, but I want to give life to children."

That time I took another deep breath, but to hold my tears because you don't wanna cry in front of your clients, especially a young kid. "Well," I said, "thank you. I am honored to have been able to work with you, and you and the other children have inspired me. You guys are my heroes. Thank you."

Their stories is what moved me. After I've seen every single one of them for one hour, for a one-year period, the very last day of my intervention, I closed my door, sat on my desk, and cried like a baby. For the first time, I intervened and evaluated children in my own language. Those young men, they were all born close to the town that I was born in. I looked at them, I saw myself. I said, "God, that could have been me." I was inducted in the cases. I was emotionally and psychologically drained. And I've experienced all sorts of emotions—anger, pain, frustration. But at the same time, I felt relieved. I felt empowered. I felt grateful for being entrusted with such a truth.

And I hope this story has become yours as well because if that is true, now we have a shared story. The children are now feeling empowered. They know that they are not alone. They know that they don't have to go through this by themselves. If that's true, if that story has become yours, child sexual abuse has been defeated by the mere fact that you are listening to this tonight. If that's true, we are becoming victorious because you and I are saving lives, and all of the other victims out there are grateful for it.