Togetherness and Why It Matters

Are you ready to take your courageous heart and desire to impact the world to the stage and tell your story?
YES! I am ready!
Description
Speaker
Transcript
During this talk, David Metcalf tells three fascinating stories of journeys in his life. He shares the feeling of togetherness while visiting a Native American tribe, a Russian family, and an indigenous tribe in Borneo. He says that after his visit to Borneo, he felt sad for the future of the people there. “But I really felt then, and I certainly believe it now that together we can make a difference.” He started The Togetherness Project working with people from all over the world. In Bali, the project has helped revive traditional ikat weaving. And he details other Balinese industries that the project has supported, “. . . to forge a really powerful sustainable future on this island.” 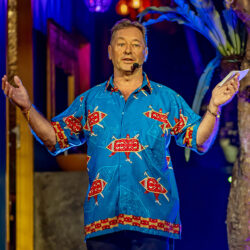 Tonight I'm gonna talk about why togetherness matters. And I wanted to do that by telling you three short stories of journeys in my life and experiences that I've had and why I believe that. So the first of those stories begins in the Black Hills of South Dakota in 1980 when I attended a survival gathering of the Lakota - the indigenous people of that area - on the Pine Ridge Indian Reservation. And this survival gathering was all about people from all over the world, environmentalists, activists, Native American leaders coming together to defend the land of the Lakota. The Lakota had experienced 200 years of colonialism. Four hundred and eighty treaties were made by the government, and every single one was broken by the government, not by the Lakota. So here they were in this situation. There was uranium under the ground, and that's what the people wanted. So they were there to fight for their lands. And when I was standing there, I was watching on the stage a young Lakota woman dancing, and there were some Lakota elders playing the sacred drum. This was an incredible sound. And this young Lakota woman was dancing, and her long black hair was trailing in the wind. It was one of the most beautiful things I've seen, and I still remember it very clearly today. But as she was dancing, this very scary thing happened.

A B-52 bomber flew low over the top of the stage. There was an air force base nearby. And I think it was a deliberate attempt by these people to say, "We're the boss. We're gonna take your land." But I felt with that sense of togetherness with these people from all over the world, with the same passion, with the same desire to work together, to protect their land, that it was possible.

I want to go forward about ten years to 1990. We'd just come through ten years or more of, I guess, the Cold War or America pointing nuclear missiles at Russia. And I was taught growing up that Russians were the enemy. And I could never quite understand that. I'd never met a Russian person. And I was always wondering "Why are they the enemy? What's so bad about these Russians. Why do they want to destroy us? Why do they want to blow us up and destroy our way of life and everything else?" But I realized that I had to go there to find out for myself.

So I was able to organize a private invitation to visit the Ukraine, which was part of Russia at that time. And I was invited by a woman by the name of Mira. Mira means peace. And she was head of the People's Diplomacy club in this town. But before I went to Krivoy Rog, I had this crazy idea with my wife Steph, who's sitting down here tonight, to cycle from Europe to Russia and carry an Earth flag, which represents the Earth and oneness - that we only have one planet and together we must protect it. So we cycled through Europe and Eastern Europe, and we got to Russia. And then we took a train to Red Square in Moscow, and we unfurled the Earth flag. All these people looked at us kind of strange. "What are you doing?" "What's all this about?" So we explained that we had some media coverage.

And then we went down to Krivoy Rog, and we met the family, the Russians, and we spent ten days with Mira, her family, her friends, and every day we got into these incredible conversations, explaining about our life, how we lived in the West. They told us all about life and Russia, all the difficulties they had, their dreams, their loves - all that was important to them. And we told them what ours were. And on the last day, they put on this lunch for us, and there were Cossacks, and there were World War II veterans. And there were young Russian people - Ukrainians - and teenagers. And we had this incredible experience. And when we went to leave, when we finished that lunch - we were leaving the next day - we embraced with the most incredible love and feeling and devotion and respect - respect for each other. And again, at that moment, I realized that togetherness really matters.

And the third story is an experience in Indonesia about eight years ago. And I was traveling with six Australian men up the rivers of Borneo in North Kalimantan. We were traveling on canoes up this river with engines on the back. And we were going up to this village called Setulang up in the original rainforest of Kalimantan. 130 million years old, the oldest rainforest on the planet. So we were going to this village for the first time. We were gonna spend a few days with the Dayak people, with the indigenous tribes of that area. And as we were traveling up this river, and I want you to just kinda come with me on this part of the journey. So we're traveling up on these boats, the sun setting coming down through the trees, two hornbills, which are the sacred birds of the Dayak, flew in front of us, in front of our path, which is a very good omen.

And then we came around the bend in the river, as we entered into the village. And there was about fifty of the Dayaks all lined up waiting for us in their traditional costumes. So happy to welcome us. These strangers from a country, Australia, New Zealand, whatever, they'd probably never heard of, but they were there to welcome us. And they were so honored that we'd come to their village. And then, for the next six days, they took us into the forest. We stayed in the forest. They danced. They sang. So much joy, so much connectedness, so much togetherness over those few days. And we got to understand about the way that they live their spiritual connection with the forest. And, of course, we tell them about our lives. And this was an incredible experience. And again, when we went to leave, we were like family. We were family.

But we left with some sense of sadness because what future do they have? You know, palm oil. I'm sure you know all about that. It's coming into those areas. But I really felt then, and I certainly believe it now that together we can make a difference. Together we can save those forests. We can help them preserve their culture. So coming to today, I decided to sort of put all this together. And what do we do with togetherness? How can we make it really impactful? So I decided to start a project called The Togetherness Project. And part of the reason why we're here tonight, The Togetherness Project is all about working together with people from different countries, nationalities, cultures, Balinese, Indonesians, Bule, foreigners from many different countries like you all are tonight.

And I really believe that if we can put our minds together, our creativity, our passion, our beliefs, we can do wonderful things. I think on this island in particular, during this time, it's such an incredible opportunity to do that, to forge a really powerful sustainable future on this island. And I think of what we've done so far with The Togetherness Project bringing back the traditions through the ikat, through the weaving revival, which you've seen tonight. That's probably one good example, where there's twenty-five women now in the community of Pesalakan, and they're employed, that stopped doing the ikat weaving twenty-five years ago, but have now brought it back and created some income during this time. The honey farm up in Karangasem. The traditional coffee in Munduk. We're supporting organic farmers here - indigenous farmers in Bali. If anybody wants to have their land turned into an organic farm, we're providing that service and supporting the local people as well. We're organizing events. The first one's gonna be next month in October.

So I really, really hope that all of you can get involved in some way. I mean, just tonight, you can buy a Bag of Hope if you wish. These sell for 850,000, and all that money goes to support the communities.

So I really believe that togetherness does matter and we can all play our part. Thank you.