Are you ready to take your courageous heart and desire to impact the world to the stage and tell your story?
YES! I am ready!
Description
Speaker
Transcript
Jeroen Van Overbeek brings water filters to people who desperately need them. In this talk, he describes his work in August 2018 when an earthquake struck Lombok. The mission; to bring water filters to an isolated village. He speaks about his work in Indonesia collaborating with other charitable organizations since the COVID-19 pandemic. He had wondered how he could help the communities in need and realized that water filters were the answer once again. He says, “You don't need to buy water, and you also basically don't need to boil it. It's just basically free, and in these difficult times, every penny saved counts.” 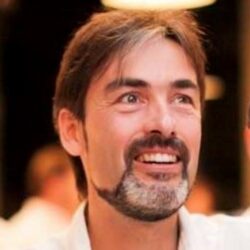 Lombok, September 20th, 2018. It has been one and a half months since the terrible earthquake of August 5th struck the island claiming 563 lives and made half a million people homeless. I was driving up this hill in northwest Lombok. Our mission was to bring water filters to this village, quite isolated. The road was winding and quite steep. Our car had to get back in first gear a couple of times. What I just saw was incredible. There was no house standing anymore. We saw only rubble. There's bricks, bricks, rubble, metal bars. No house. Like a war zone. Finally, after forty-five minutes and the last bend, the village appeared. As soon as we got out of the car people were very happy to see us. Came and almost hugged us. No COVID time then! It was a very isolated village, so people hadn't seen other people for a long time. The wind was blowing very strongly, and a lot of dust on top of this hill. On the left hand side, I saw a communal kitchen. And then I was asking the people, "What has been your main issue? What happened since the earthquake?" "Well access to water, to clean water." And then the terrible news struck. Two babies had just died from diarrhea. That night back in my hotel room in the city in Mataram, I was still devastated. I couldn't sleep. I found myself crying, actually. And suddenly, it all made sense to me. All these questions I'd been asking myself for so many years. "How can I give back? How can I be of service?" It just all made sense to me suddenly. I did the right thing. Well, this year's transitioning well, this month, transitioning from corporate world to social entrepreneurship, all these doubts, these fears was just a process to go through. I realized that was the right thing to do. I'm not a doctor, but I save lives.

Two weeks later, we went back up to that village to check on the kids and the babies, and they were fine. So water is life, and access to clean water is a human right. I'm privileged to be able to bring this beautiful gift to the communities here in Indonesia with my filtration systems.

Right now, since the pandemic started, there is another disaster. It's more like an economic disaster. A lot of people have lost jobs. So when the pandemic struck a couple of months ago, I was just wondering, "What can I do to help the communities in need, or what would be the thing to do?" And that filters were the answer once more because with them you just save money. You don't need to buy water, and you also basically don't need to boil it. It's just basically free and, in these difficult times, every penny saved counts.

So I decided to launch a fundraiser end of April early May, a couple of months ago, for the water filters. It's been quite successful. I raised about 30,000 plus dollars until now, which represent fifteen hundred units for fifteen hundred families. But yeah, that's all nice, but then comes the most difficult part. It's the execution. So where to bring them? Who really needs them most on this beautiful island? So I believe in the power of collaboration, and together we are stronger. So I reached out, and I've worked since the last four months with about twenty different organizations, which are mainly supplying food or seeds to grow vegetables or some people who provided land plots, and together we bring food or the seeds and the water filters. So people can save money and basically don't have to buy water.

I have been to places that I've never imagined would exist on this island to, let's say, houses and dwellings that I thought, "How can that exist?" People were actually a little bit shy to show their places. So it's a lot of places. These are for sure in Bali, in the west of Bali, but also in the city in Denpasar and people, not only Balinese people, but also people from Java, from Sumba, from Timor, which have jobs where they have all lost also income due to COVID like for instance, waste pickers, street food vendors, and drivers. So, these people have all been through this. And now the other day, actually it was one and a half weeks ago, I went to Denpasar to Padangsambian together with Crisis Kitchen, which is one of the organizations I work with. And this lady was there. This old lady was there sitting. And so I sat next to her, and I started to ask her how she was doing. And she was like having a smile and saying, "Oh, thank you for bringing some food and water so we can go through a couple of more weeks." And then what she said struck me, like she said, "You know, I had a stroke four years ago. I don't want to depend on my son the whole time. I have no friends. Thank you for being my friend." And I was like, wow. So then I realized that small acts of kindness can really change people's life.

I hope my story inspired you. And I'm just asking you to do a bit more small acts of kindness every day. You never know what it means to people. Thank you.