From Rock Bottom to a New Beginning

Are you ready to take your courageous heart and desire to impact the world to the stage and tell your story?
YES! I am ready!
Description
Speaker
Transcript
In this YouTube video, Aren Bahia tells the story of how he was stopped at the airport and accused of being in the drug trade, before being released with the help of a friend and the drug detection dog. Bahia reflects on his life and how he had reached the lowest point before deciding to make a change. 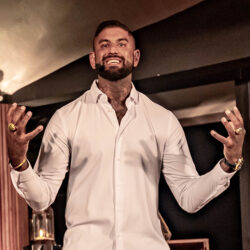 Aren Bahia is a Canadian entrepreneur who's lived a "full-spectrum life."

Growing up in a very rough area in Vancouver, Aren's seen his world shift from a life of fast cars, fast cash, and fast women to meditation and yoga in the Himalayas, where he learned to live a life of generosity, connection, and compassion.

Starting over in Bali in 2016, he's launched four businesses and raises tens of thousands of dollars every year for underprivileged and mentally disabled Balinese children.

Aren founded Karma House Bali, Conscious Arts Tattoos, and is a co-founder of YogiLab and UluLife.