Are you ready to take your courageous heart and desire to impact the world to the stage and tell your story?
YES! I am ready!
Description
Speaker
Transcript
Very early in her career as a TV host, Lisa Fabre was asked to present a popular live TV program. Her immediate reaction was no, but to please her colleagues, she said yes. Lisa describes the sheer panic she felt before the start and ended up “Trying to survive the evening.” This is just one of the incidents when Lisa wished she’d listened to her ‘no’ and overcome her need to not disappoint people. Lisa recalls positive things happening when she listens to her intuition, even making big life changes through her fear. “It's been about listening to that inner voice that speaks to me through my longing, my inspiration.” 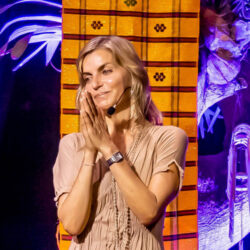 I'm twenty-six years old. And I'm the new host of a small Swedish TV show. I'm just beginning to feel comfortable with the whole thing, like talking straight to the camera as if it was my best friend and the last couple of weeks, I'm starting to get a few really good reviews. They say that I have 'it.' I feel so good. And I feel so proud.

This day a man walks into the office. I've never seen him before, but he presents himself as a producer of the Nobel Prize live event. He sits down, and he looks at me all the time when he's speaking and starts saying that it's a four-hour-long live event. I know that and all of Sweden will be watching. And then he asks me if I want to be that year's TV host. I almost start laughing because I'm so new. I've just been on television for two months. I'm a beginner. And no, I'm not ready. Absolutely not. But the producer and reporters of my small TV show—they go nuts. They're so excited because they know I will be in all the newspapers, all the magazines, and I will spread light to the tiny TV show.

So I say yes to make them happy. Two months later, I'm dressed as a princess. I'm wearing a long blue silky dress, jewels, makeup, and I'm standing in the blue hall. It's the main hall of the Swedish town hall. It's a castle-like building with twenty-two-meter high ceilings, marble floors. And in just minutes, the Swedish king and queen will walk down the stairs, followed by this year's Noble Prize winners.

Yeah, I'm here to guide the TV audience throughout this four-hour-long live event. And yeah, it's a huge step in my career, and it's supposed to be a moment of celebration, but I can't breathe, and I can't feel my feet. And in the next moment, I experience something I've never experienced before. It's like I contract into a small bubble. I leave my body, and suddenly I see myself from above looking down at myself at this empty shell standing on the floor.

And from that moment, it feels like I'm trying to survive the evening. I'm the captain of the Titanic, but I don't know anything about boats. The next day I wake up to an article in a newspaper, and the reporter says that watching me made her so embarrassed that she needed to hide behind a pillow. And the next day, I'm on the list of the most unpopular people of Sweden. I start looking down when I meet my coworkers in the TV corridors because I can't stand meeting their eyes. But I decide that I will learn from this. I will never ever not listen to my 'no' again.

So do I listen to my no from that moment? No, I don't. I say yes to having lunch when I want to eat alone. I go to parties when I would like to stay home. I stay too long in relationships. And I even say yes to impossible projects like playing a part in a theater play that requires me to travel for two hours and not getting paid, but instead needing to pay for the equipment, the rent, and no upside whatsoever and doing that for weeks until I can't stand it for one more minute and then quitting absolutely too late. It's insanity. I'm so afraid of making people disappointed that I end up with people being really disappointed and angry.

So I leave this small TV show, and I decide that I will jump on to one-year actor training because I loved theater when I was a kid. And I'm so longing to be joyful as a kid again. And it's an incredible year—so much fun. And at the end of the year, we have a big performance. I don't know this, but there is a soap opera producer in the audience. And she calls me a few days later, and she asks me if I want to play one of the main characters in the soap opera Friends and Enemies. And I feel this instant joy like bubbling energy in my heart. Like, yes! And then crushing energy. Crushing thoughts saying, You can't do that. You're a serious journalist. Are you crazy? People will be so disappointed.

So I'm struggling with this for a week. Should I choose this joy that I'm feeling or this tight costume? It feels like for me going from being a serious journalist to becoming a soap opera actress is the same thing as if I would have been a nun and then suddenly become a stripper. And I don't know if you had the experience or if you remember the experience of being a teacher's pet or an adult's favorite and at the same time feeling the weight of that and that finally messing up and disappointing them sets you free. So that's what's happening—because I chose the soap opera. Ahh! And people judged me badly. I'm not at all seen as a serious journalist anymore, but I'm free.

Ten years later, I'm on vacation in the South of France with my husband and two kids. And we are walking by the ocean—glitter in the waves, a soft breeze, and these golden pink lights everywhere. And I just ask my husband to please stop. We just stand there. Me and him and our kids. I can feel it everywhere. "I want to live here. I want to move from Sweden to France." And I look at my husband, and he just nods and says, "Me too." But there is no way we can make this happen. We don't have the money. We don't have any job contacts or friends in the South of France. We have no one to pick us up if we fail.

And the following two months are the most scary and challenging of my life. It feels like I'm dying and being born at the same time because people get angry, upset, disappointed. How can we be so selfish, irresponsible, and leave people behind like that?

But every time I close my eyes and I think about a life in the South of France, I feel this bubbling life force running through my veins. And we take a leap of faith through the fear and with the courage of many lions. We made our way to France, and we found everything. We found a house, friends, money to survive, and so much more.

I'm not married anymore. And I don't live in the South of France anymore. Huge life changes that brought up my biggest fears—the fear of being alone, the fear of feeling guilty, ashamed. But it's never been about choosing or not choosing fear to me. It's been about listening to that inner voice that speaks to me through my longing, my inspiration. And sometimes as a very clear no. My soul's voice and my soul didn't choose life to be born here on earth to play small and safe or to please others. My soul wants me to grow and to expand and, most of all, to be happy. So my soul is my wise and kind guru.